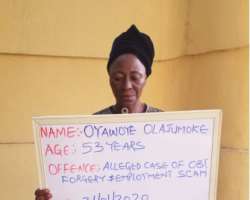 The Ilorin Zonal Office of the Economic and Financial Crimes Commission, (EFCC) has arrested a Senior Official of the Kwara State Ministry of Finance, Olajumoke Rhoda Oyawoye for allegedly defrauding job seekers under the guise of helping them to secure employment into the Civil Service both at the Federal and State levels.

The Acting Head of Media and Publicity for the Commission, Tony Orilade told The Nigerian Voice today that Oyawoye who is a level 14 officer with the Kwara State Ministry of Finance allegedly received various sums amounting to about N3million from her victims and went ahead to offer them fake appointment letters.

He said Oyawoye's journey to infamy began when the Commission received two separate petitions alleging her involvement in employment scam.

According to the petition, Oyawoye claimed that she could help secure employment into the Civil Service and that for the State Employments it will cost N250,000 per slot while for Federal Government Parastatals it will cost N350,000.

The petitioner thereafter gave her money to assist in securing employment for his children and other Church members into the Nigerian Immigration Service.

Orilade said Oyawoye would soon be arraigned in court after investigation.