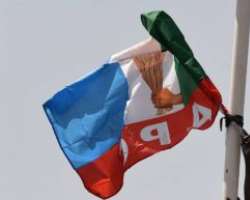 The nation's political, religious and traditional leaders must be cautious against succumbing to the antics of the insurgent group Boko Haram, which is geared to undermine the unity of the country and if possible, stoke religious crisis between Christian and Muslim faithful, the All Progressives Congress has warned.

Recent comments by leaders following attacks by an insurgent group on soft targets “is assuming a dangerous ethnoreligious slant”, which has to be curbed for the country's collective interest, the party said via a statement signed by Lanre Issa Onilu, its National Publicity Secretary observed that

There have been growing incidents of gruesome murder of Christians by Boko Haram insurgents and armed herdsmen in recent months.

They abduct and slaughter their members and leaders at will across states in the North, prominent among which is the decapitation of Lawan Andimi, Chairman of Christian Association of Nigeria (CAN)  in Michigan Local government area.

Some prominent Nigerian political and religious leaders have asked the APC administration and particularly, President Mohammadu Buhari to resign over the worsening insecurity.

However, APC warmed that the slant of the narrative is tilting to serve the aim of the insurgent which is to divide and pitch Christians against the Muslims.

The party alerted that the goal of Boko Haram has not shifted from stoking religious war in the country and warns that Nigerians must guard against the trap.

The statement read: “Recently, public commentaries on the activities of Boko Haram and bandits, as well as other forms of criminality in the country is assuming a dangerous ethno-religious slant, unfortunately influenced by insensitive and selfish partisan narratives by shortsighted groups and individuals. This is a red flag that must be checked for our collective well-being.

“Understandably, the aftermath of an attack will trigger inflamed responses particularly from those affected. We however have a duty to rise above simplistic narratives and politically-tainted criticisms which are oftentimes misplaced and counterproductive.

“True to form, violent extremists and terrorists all over the world would adopt desperate tactics by selecting soft targets for their barbaric and opportunistic attacks. In Nigeria, these godless people are attempting to stoke religious sensitivities by pitching Christians and Muslims against one and other through their recent pattern of cowardly attacks. This demonstrates how debased and degraded Boko Haram and those who sponsor it have become.

“We must not fall for this divisive ploy. In our respective spaces, we should understand that these violent extremists are our common enemies, and are blind to religious and political affiliation and socio-economic status.

“Our leaders – religious, political, traditional and all others in positions of influence and authority, must now show leadership and temperance in their utterances and actions. Doing otherwise will be acting the scripts and playing into the hands of these fanatics seeking to divide us and pitch us against each other.”

Onilu said the government is doing its best to curtail the activities of Boko Haram and other criminal hands .

“In 2015, followed by a reelection in 2019, Nigerians voted President Muhammadu Buhari to among others win the war against terrorism and generally secure the country. Despite the opportunistic and pocket of attacks on some soft targets, the President's resolve and the APC-led government in degrading Boko Haram is not in doubt.

“Our armed forces are now better equipped with their welfare prioritised; previous insurgency-ravaged communities are being rehabilitated and resettled; gone are those days when attacks particularly on the country's capital city of Abuja and other parts of the country were routine. Currently, no inch of Nigeria's territory is under the control of Boko Haram; bandits, kidnappers and other criminal camps are being cleared with the criminals suffering heavy casualties on a daily basis.

“Finally, we once again deeply commiserate with families and religious organisations, particularly the Christain Association of Nigeria (CAN) and the Catholic Church whose members have been recently targeted and killed by the terrorists as well as of the places of worship attacked. We must now work collectively and continue to support and cooperate with the President Buhari government and our security services on the frontlines as they work to ensure the safe release of our abducted citizens and rid the remnant of these terrorists from our land”.