The Muhoozi Project Is A Decoy! 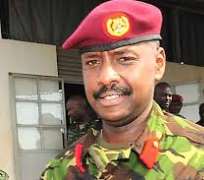 The campaign to make Lieutenant General Muhoozi Kainerugaba, 45 years old, the next president of Uganda, looks genuine on the surface, but I strongly believe that there will not be a Muhoozi presidency anytime soon. I'm convinced that the Muhoozi project was/is a decoy to prolong Museveni's presidency, and identify the military Generals,or those in NRM, whose loyalty to Museveni wasn't absolute--- the son helps to protect the father believing that one day he would take over, and this makes him suppress any opponents of his father, thus, literally rendering him an enemy of both NRM historicals and majority of Ugandans. According to Hon.Ssemujju Nganda,in one of his articles in the Observer, most of the Permanent Secretaries and heads of different state organisation, were hand picked by Muhoozi himself.

If Museveni, officially 75 years old, wanted to make his son the next president, he would have done it last year in 2019, the year the opposition was at its weakest, and throwing bubs at each other. But, guess what, Museveni is not only preparing for 2021 elections, but he's even speaking of the 2026 elections.It will be harder for Muhoozi to become president with his father too old, or dead.

Nevertheless, we still have a succession of Museveniates claiming to be Muhoozi supporters demanding that he succeeds his father. They are basically advocating for hereditary succession of the presidency. Their schtick is that he has as much right as any other Ugandan to stand for presidency, and I absolutely agree with the "right" bit. His strength is that he's already closest to the wheels of power and has some influence in the army,and those opposing him know this which is why they’re making a concerted effort to paint him as someone who has got everything with a silver spoon, and therefore undeserving.

He is seen as someone who isn't Museveni-- he cannot think on his feet; he has no capacity to think outside the prism of being dad's boy; he reportedly has a short temper and he isn't a good listener;he loves the bottle,unlike the dad; he's not quick witted enough to respond to sudden changes in the political sphere; he can't think as fast as events move on.

Being made a presidential adviser on Special operations in 2017 was seen as a vote of no confidence by his dad, which means that he doesn't lead. He hasn't got the capacity to lead. This matters. It's not some pointless meetings with ambassadors of other countries that is at stake; it's the future of our country. The population won't accept him. The NRM historicals won't accept him. Ever.

As a result, everything he does is expressed through that prism. Fair enough; he's been a passionate campaigner for some honourable causes. A friend of mine living in USA, but close to the family, also told me that actually Museveni's children including Muhoozi, were well brought up-- they have manners and humanity-- "obuntubulamu ". However, evil hides behind many faces, even an attractive one.

I have nothing against Muhoozi as a person, but I think, with Uganda, as it is at the moment, it will prove a grave failure if he takes over from his father, and will turn the country dysfunctional. In the age of transformation, trying to subvert democratic norms and to insist for the hereditary right is utterly disgusting.

Being the leader of a country means that you need to be able to unite and unify everyone. I haven't seen Muhoozi openly reaching out to Kiiza Besigye, or anybody in the opposition. I haven't seen him standing up to his father on some issues. I haven't seen him protecting online bloggers,like us, and journalists against the so called double standards Computer Misuse Act, e.t.c.

All this has come at a time when most of us are still taking stock of the emergency of comical leaders, particularly,Bobi Wine and his People Power. Remember how we got here. The catalyst for the Bobi bounce was the loss of faith in our traditional parties and some long serving opposition leaders, and a few wins in by-elections. To his only credit, Bobi has attracted shedloads of young activists to the cause, though he has misled them into believing that elections can remove Museveni.

Uganda has the biggest young population in the world. Muhoozi and Bobi are in the same age bracket, and he(the first son) would probably be an attraction to some youths in the country. But, guess what, his father isn't ready to let go. By 2026, Muhoozi will be in his 50s, and still dreaming of the presidency, if at all he is interested. Just like I told people years ago that the succession queue was in Amama Mbabazi's head, I can tell you now that the Muhoozi project is a Disney land fictional movie.It probably doesnt make sense to Museveni himself!