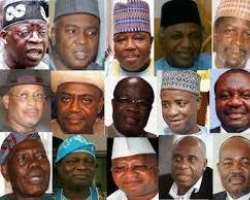 There is prospect Nigerians keen on knowing details of payment of life pensions to former governors across the 36 states in the country, and the names and number of ex-governors and other officials collecting pensions, may soon have some answers, as Socio-Economic Rights and Accountability Project (SERAP) has won the latest round in the legal battle to compel 36 state governors to disclose these details.

Justice Folashade Giwa-Ogunbanjo of the Federal High Court, Abuja last week granted leave clearing the way for SERAP to advance its case to compel the 36 state governors in Nigeria to disclose details of payment of billions of naira of tax-payers’ money as life pensions to former governors and other ex-officials under their respective State pension laws between 1999 and 2019.

Justice Giwa-Ogunbanjo, in granting leave, stated: “After going through the Application filed by SERAP supported by 18 paragraphs Affidavit, with supporting exhibits, statement of facts, and verifying affidavits and written address in support, leave is hereby granted for SERAP to pursue its suit.”

Justice Ogunbanjo-Giwa granted the order following the argument in court on an exparte motion by SERAP’s counsel Kolawole Oluwadare. The suit is adjourned to Monday, 10th March, 2020 for hearing of the substantive suit.

SERAP had in the suit number FHC/ABJ/CS/19/2020 filed last month sought: “an order for leave to apply for judicial reviewand an order of mandamus to direct and/or compel the 36 state governors topublish names and number of former governors and other officials that havereceived pensions and the total amounts received between 1999 and 2019 and haveat the same time served and/or serving as members of the National Assembly.”

The suit followed SERAP’s Freedom of Information (FoI) requests dated 9th December, 2019 to the governors, expressing concern that: “granting pension for life to ex-governors and other officials represents the use of public office to advance private interests, suggests the misuse of legitimate discretion for improper reasons, and has created a more cynical public view of politics and politicians.”

According to SERAP, only two governors—Delta state governor, Mr Ifeanyi Okowa and Kwara state governor, Mr AbdulrahmanAbdulrazaq—responded to its FoI requests. Although Mr Okowa directed his Head of Service to send the details requested, no information was received as at the time of filing the suit.

SERAP also said: “governor Abdulrazaq provided a copy of the pension law and list of former governors and ex-officials receiving pensions in Kwara State under the state’s Governor and Deputy Governor (Payment of Pension) Law, 2010, naming Cornelius O. Adebayo; Mohammed Shaaba Lafiagi; Sayomi Simon Adediji; Bukola Saraki; and Ogundeji Joel Afolabi as recipients of life pensions in the state. However, the governor did not state the amounts that have so far been collected, and whether the state would pursue recovery of the pensions paid.”

According to the Kwara state pension law (as amended), governors and deputy governors “from the year 1967 shall be entitled to pension for life at the rate equivalent to the annual basic salary of the incumbent and other benefits as provided by the Revenue Mobilization, Allocation and Fiscal Commission. The pension shall include: furnished 5-bedroom duplex, 300% for furniture replaceable every 4 years; free medical treatment for governor and deputy governor and their immediate families; car maintenance; drivers [pensionable]; house maintenance; and two cars for the governor in addition to 1 pilot car to be replaced every 3 years.”

According to SERAP: “both governor Okowa and governor Abdulrazaq did not in their responses make any commitment to repeal the pension laws in their states and to seek refund of the pensions already collected by former governors and other ex-officials.”

SERAP’s suit is coming on the heels of the landmark judgment delivered last year by Justice Oluremi Oguntoyinbo of the Federal High Court, Lagos ordering the Attorney General of the Federation and Minister of Justice Mr. Abubakar Malami, SAN to challenge the legality of states’ pension laws permitting former governors and other ex-public officials to collect such pensions.

The judgment followed the invalidated pension law for former governors and other ex-public officers in Zamfara State, which provided for the upkeep of ex-governors to the tune of N700 million annually. The state has produced three former governors since 1999.

SERAP is also seeking “a declaration that the failure of the 36 state governors to provide SERAP with the requested information on Pension Law in their respective states as requested constitutes a breach of SERAP’s right under the FoI Act, 2011, and for such further order(s) the Honourable Court may deem fit to make in the circumstances.”

“The public interest in the disclosure of details of payment of pensions to former governors and names of the recipients of such pensions sought by SERAP outweighs any private interest the 36 state governors may be protecting.”

“The suit is in the national interest, public welfare, public interest, social justice, good governance, transparency and accountability. There is no justifiable reason for the governors to refuse to provide SERAP with the details of payment of pensions and other related information requested.”

“Public officials should not encourage, sustain, or implement jumbo pension laws that show an appearance of conflict of interest, impropriety or create situation of personal enrichment. The pension law negates the duty to act honestly and to represent the needs and concerns of the people, and to refrain from activities, which interfere with the proper discharge of public functions.”

“Those who manage the resources of the state ought to protect the interest of the people in their states. Public officials while entrusted with duties and discretions are not to act in their own best interest, but to discharge those duties and exercise those powers in the interests of the public.”