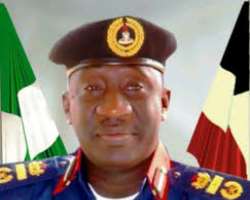 The Honourable Minister of Mines and Steel Development, Arc. Olamilekan Adegbite, has commended and applauded the officers and men of the Nigeria Security and Civil Defence Corps (NSCDC) over security measures taken to protect the mineral resources in Nigeria. The minister appreciates the Corps effort in tackling the illegal mining of mineral resources in Nigeria despite no financial support from the ministry, which he noted was a drain on the economy that offers no benefit to both States and the Federal Government.

Adegbite gave this commendation while on a courtesy visit to the Commandant General NSCDC Abdullahi Gana Muhammadu at the Corps' headquarters, Abuja on Friday. Though the Minister of State for Mines and Steel Development Dr. Uchechukwu Ogah has been here before onbehalf of the ministry but I decided to be here in person to appreciate the leadership of NSCDC for the efforts giving to the ministry despite no financial backing by the ministry for now, Adegbite stated.

On the other hand, the Commandant General NSCDC Abdullahi Gana Muhammadu, expressed satisfaction for the visit made by the minister, he applauded the Minister's professionalism in co-coordinating the activities in the Mining Sector, since his assumption of office.

Gana assured the Minister that the Corps would continue to support the ministry's initiative in enhancing the mineral sector to ensue national growth. Our mandate is to ensure security of lives and properties. This, we have been doing, and we won’t relent, Gana said.