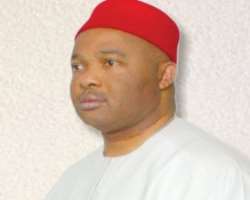 Governor Hope Uzodinma has warned the leadership of the People's Democratic Party (PDP) against inciting citizens of the state with their series of protests, maintaining that, they are capable of “fanning irredentist sentiments against the legitimate government of Imo State.”

The warning was contained in a press statement he issued through the office of his Director, Media and Strategy, of his campaign organisation, Mbadiwe Emelumba.

According to the governor, who maintained that the opposition party is hell bent on deceiving the public that their candidate Rt. Hon. Emeka Ihedioha, won the governorship election of March 2019 when indeed he never won.

He further accused the PDP of malicious deceit of the public. “Because they know that they stole Governor Hope Uzodinma's mandate, which has now been recovered, yet they keep deceiving and inciting the public over the Supreme Court judgement which recovered the APC mandate, ” the governor said.

Uzodinma has also claimed that PDP has been taking advantage of the ignorant people he alleged were imported from neighbouring states of Abia and Anambra.

“The truth is that Imo people are very happy with the governance of Senator Hope Uzodimma , the executive governor of Imo State. When the governor visited the Relief Market in Owerri on Monday the rousing ovation that greeted his arrival by the traders clearly underscored this fact.

“The same scenario repeated itself at the state government secretariat on Wednesday when the governor went to inspect the secretariat.

The workers were ecstatic in their rousing welcome. Their loud shouts of “Onwa , Onwa” made such great scene that motorists plying the Owerri-Port Harcourt highway had to stop to know what was going on.

“So if traders, market women and men, workers, as well as civil servants are happy with the governor what is left of the Imo population. Believe me those people protesting are not Imo people

“At any rate, what are they protesting against? Ask the protesters and they will tell you that they don't even know. They were hired to do the bidding of PDP. The Imo election petition matter is dead and buried.

“The PDP should stop hiring foreigners to incite the public and fan iredentist sentiments to create a false impression about the situation in Imo State,” Governor Uzodinma warned.

However, the PDP reacting to the claims of the governor denied ever sponsoring or getting in involved in the last protest held in the state on Thursday.

State secretary of the PDP, Ray Emeana told our corresspondent that the citizens of the state on their own accord took to the street to demonstrate what they described as injustice done by the Supreme Court by sacking Ihedioha.

Emeana said “by the fact that people massively demonstrated against the Supreme Court judgement confirmed that he did not win the election.

“If he had won, Imo people would not be trooping out, however, PDP did not carry out any protest recently: what happened in Owerri, on Thursday, was a protest by the citizens of Imo State and not PDP rally,” Emeana explained.

Meanwhile, the PDP scribe has insisted that Governor Uzodinma never won any election and so has nothing to reclaim as he had earlier stated.

“He was not even a candidate of APC by the Supreme Court judgement and he came fourth in an election conducted by INEC, so what is he reclaiming?” Emeana queried. (The Sun)