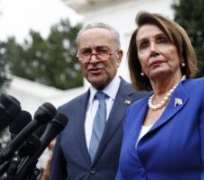 WASHINGTON — The U.S. Senate on Friday rejected by a slim margin calling witnesses to the impeachment trial of President Trump, setting up a final vote to end the proceedings.

Two Republicans — Sen. Mitt Romney of Utah and Sen. Susan Collins of Maine — voted with all 47 Senate Democrats in favor of considering votes to call witnesses and to subpoena documents from the White House.

Two more votes were needed to reach the simple majority needed to pass the resolution.

The Senate spent a long block of time late Friday before and after the vote working out an agreement on how the trial will end, and decided to hold a final vote on guilt or innocence next Wednesday. A 67-vote supermajority is needed to convict, and that was never a likely outcome.

The no-witnesses result had been expected since late Thursday when a possible key swing voter, Sen. Lamar Alexander, R-Tenn., announced just before midnight that he would oppose calling witnesses.

Alexander said the impeachment proceedings “proved” the president inappropriately withheld military assistance from Ukraine to pressure the government there to announce investigations that could hurt Joe Biden, a rival for the presidency, but that he did not think it merited removing Trump from office.

House Speaker Nancy Pelosi, D-Calif., delayed sending the articles of impeachment over to the Senate until mid-January, in an ultimately fruitless effort to extract concessions from McConnell on the issue of calling these witnesses.

McConnell also defeated efforts to get a witness agreement at the beginning of the trial, nearly two weeks ago. He obtained support from all Republican senators for trial rules that put off the question until after six days of opening arguments and two days of questions. He did so in part by releasing an initial set of rules that were so stringent that it gave him ways to make concessions in exchange for support from key senators who might have otherwise considered voting in favor of calling witnesses. Senate Majority Leader Mitch McConnell. (Drew Angerer/Getty Images)

This past Sunday, news of allegations in Bolton's book — that he had firsthand knowledge of Trump's directing the pressure campaign on Ukraine — provided the last real jolt of energy toward calling witnesses. But many Republican senators coalesced around the argument that Trump had behaved badly but that his actions did not “meet the Constitution's 'treason, bribery, or other high crimes and misdemeanors' standard for an impeachable offense,” as Alexander said in his statement Thursday night.

“I believe that some of the president's actions in this case — including asking a foreign country to investigate a potential political opponent and the delay of aid to Ukraine — were wrong and inappropriate,” Portman said. “But I do not believe that the president's actions rise to the level of removing a duly elected president from office and taking him off the ballot in the middle of an election.” Sen. Rob Portman. (J. Scott Applewhite/AP)

If the president were found guilty by the Senate and removed from office, he would also be barred from holding public office ever again.

Alexander and Portman were echoing a version of the argument made by Trump attorney Alan Dershowitz, who said that only a criminal act meant to personally enrich the president could be the basis for removing him.

Constitutional lawyers said the Dershowitz defense would give this president, and any future president, carte blanche to abuse his or her power.

Other Republican senators who announced their opposition to new witnesses on Friday offered a variety of other reasons for their decision.

Sen. Lisa Murkowski, R-Alaska, said Friday that she would vote against witnesses in part because she did not want to create a 50-50 tie that would require Chief Justice John Roberts, who presides over the trial, to either break the tie with a ruling or allow the measure to fail by abstaining from weighing in. Sen. Lisa Murkowski, standing, casts a no vote for calling witnesses in the impeachment trial of Donald Trump. (Senate TV via Yahoo News)

And Murkowski took aim at colleagues like Sen. Elizabeth Warren, D-Mass., who asked a question on Thursday regarding Chief Justice Roberts. Since senators submit their questions in writing, that put the chief justice in the position of reading a question about himself.

“Does the fact that the chief justice is presiding over an impeachment trial in which Republican senators have thus far refused to allow witnesses or evidence contribute to the loss of legitimacy of the chief justice, the Supreme Court, and the Constitution?” said Roberts, reading Warren's question.

Murkowski was clearly not pleased with Warren's tactic and alluded to it in her statement.

“It has also become clear some of my colleagues intend to further politicize this process, and drag the Supreme Court into the fray, while attacking the chief justice. I will not stand for nor support that effort. We have already degraded our institution for partisan political benefit, and I will not enable those who wish to pull down another,” Murkowski said .

After the vote concluded, Schumer went to huddle with his fellow Democrats, and told reporters the refusal to hear witnesses amounted to “a tragedy on a very large scale.”