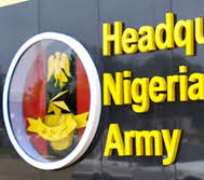 He also said that the Nigeria Military has banned a non governmental Organization, ADRA Nigeria from operating in Borno state and north east at large because it's license has expired since 31 at December 2019.

"As such, we have closed the office and their staff handed over to the police in Maiduguri. Hence, their operations is now illegal", Adeniyi said.

The Theater Commander added that the military does not escort commuters in any route as speculated throughout the roads, stressing that," but there are soldiers and patrol teams on mobile going up and down the roads providing security cover to the commuters."

" All commuters should go on their trips. Even the GOC and Unit Commanders are also on patrol of roads within their commands. But the commuters should be law abiding and careful in order not to take undue advantage" Adeniyi said.

On why the military arrested the Daily Trust Reporter Tunji Omirin in Thursday evening, he said," We picked him up because of certain issues we want him to clarify "

"He was made to answer some questions. He gave us his statement but with the intervention of Chief of Army Staff, COAS, Lt. Gen. T. Y. Buratai.

"We the military have the right to call or invite anybody to answer some questions in certain issues especially when it has to do with the national security and integrity of the nation", Olusegun said.

He also said it was the hand work of enemies of the Nigerian military which is untrue, fictitious, and a figment of mischievous makers.

Addressing journalists Friday in his office, the Theater Commander said" It is a lie and false that the Military is not in good working relationship with Borno State Government."

"It is not true. It is a figment of some people who don't like the military. The military and government of Born o state are in good relationship and working cordially.

"We work together every day . Speak with each other as well as Yobe state Government. Even though an incident happened recently between the military and the State Governor. That can not stop our relationships", Adeniyi said.

According to him, the military patrol teams have been in Mobile patrolling all routes and hideouts making successes in killing Boko Haram Insurgents, recovering their weapons and trucks among others.

"There is no way Boko Haram will come and say they will fight us. They only go to innocent people's farms and places to loot or steal what does not belong to them. That will even soon come to end with the establishment of our super camps in different locations, Response and patrol teams", Adeniyi said.

On the issue of Maiduguri-Biu road that is closed, the theater Commander said " it is not possible and you as journalists know that it is not true and it can not be possible.