I am no Mandela – Adama Barrow 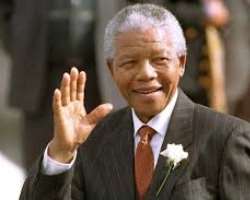 Yahyah Jammeh came to power in a bloodless coup in The Gambia in 1994. The then junior military officer who was just twenty-nine years old seized power and sacked the democratically elected government of the nationalist and founding father of the tiny former British colony, Sir Dauda Jawara.

Jammeh ruled with an iron fist and spared no dissenting opinions to his authoritarian government. Dissidents were clamped into detention or forced to flee the country for their dear lives. His human rights record was a source of global concern and he was alleged to have masterminded numerous killings during his sinister administration.

Yielding to pressure by the international community, he decided to democratize his rule. It was more or less a personal transition from being a military dictator to becoming a civilian one as he ensured that he used the machinery of the state to perpetually rig himself back to power. He got his comeuppance in 2016 when the opposition parties rallied round the candidacy of Adama Barrow to endure that the latter humiliated him at the polls. Jammeh initially accepted the results but he later reneged on his promise to hand over power peacefully to Barrow, a real estate magnate who once worked as a security guard in the United Kingdom. The international community forced Jammeh into exile in Equatorial Guinea with a promise to keep him away from the Pandora’s Box being opened in his case with regards to both his human rights record and his alleged mismanagement of public funds.

Many Gambians saw Barrow as the messiah as his humble background resonated well with the voters who saw him as one of their own. He pledged during his campaign to hand over power after only three years and promised not to complete the five year tenure that he was entitled to. His countrymen believed him and massively voted for him as his campaign promise even made him more attractive than Madiba Nelson Mandela who finished his first term of five years before handing over power to Thabo Mbeki.

Three years down the line, the magic of Barrow has been fast disappearing from the lips of many of his supporters. The economy has been worse off and the much promised economic revolution backed by foreign investors through the vast international contacts of the President has become more of a mirage. There is hunger in the land and all the actions of Barrow don’t point to the hunger pangs ending anytime soon.

In the anguish of the people, many remembered his promise to step down after three years and have taken to the streets to protest that he should indeed step down since no one coerced him to make that promise. The ‘three years Jotna’ which means enough in the Wollof language has gained momentum on the streets and on social media. The police force responded with a brutal crackdown on the peaceful protesters as 137 were said to have been arrested with dozens more clamped into detention which included some prominent journalists. Many human rights organizations all over the world most notably the Amnesty International have criticized the excesses of the police in dealing with the protesters. Seedy Njie, a close adviser to Barrow was quoted to have said this as gleaned from the Guardian UK “When they made this agreement, there were a lot of politicians around him who were misguiding him. When he assumed office … he looked at the laws and he realised that he was elected to serve a period of five years.”

Barrow was initially hailed when he first assumed office as he established a truth and reconciliation committee to look into the human rights abuses allegedly perpetrated by his predecessor. His critics opine that he didn’t do much to bring those found guility of human rights abuses to book. Others point to the wobbly economy characterized by spiraling inflation and rising unemployment among the youths.

In a rather bizarre twist of fate, some of his predecessor’s supporters have been calling for the return of their leader back to the country despite his 22 year misrule. This is akin to the Biblical Israelites who planned to return back to Egypt when they were tired of the challenges that they faced in the wilderness.

Barrow should do the honourable thing by immediately resigning as he wasn’t compelled to make the promise. Agreed, he must have made it under some pressure from his supporters who wanted to portray him as a different kind of leader but he should be a man of his words and be different from his predecessor. It is his constitutional right to serve out his five year term. Why is it now that he is just discovering that? Why the bid to impress the electorate? Was it really necessary? He who comes to equity must come with clean hands goes the age-long aphorism. The protesters were injured today; tomorrow it may be mass deaths.

Time is fast running out and history beckons! Adama Barrow please leave so that you can earn an eternal place when posterity comes as a true democrat.