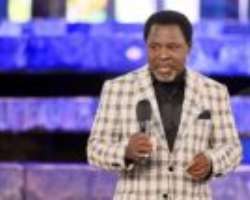 I read yesterday in UK’s Guardian Newspaper that two large venues in England had cancelled their involvement in a set of upcoming meetings with Franklin Graham, the eldest son of famous US Evangelist Billy Graham, over his well-known ‘homophobic views’.

What piqued my interest in this story was the fact that one of the venues – the FlyDSA Arena in Sheffield which can hold over 13,000 people – was the same venue where Nigerian Pastor TB Joshua held a successful meeting last year in June termed ‘ Emmanuel TV UK Revival ’.

The venue – one of England’s largest indoor arenas – was packed to capacity with attendees travelling from around Europe and the world to participate in the event, despite Joshua not being physically present.

Graham, who is close to US President Donald Trump, has garnered a reputation for his ‘no-nonsense’ and blunt approach to the Gospel, regularly brandishing homosexuals as ‘sinners’ facing ‘eternal damnation’ and stating that Islam is “an evil and very wicked religion”.

While the Bible’s views on homosexuality are clear-cut, I think that Evangelist Graham could take a leaf from TB Joshua’s book in how to address this contentious issue with wisdom in a divisive world.

A Google search will reveal plenty of ‘testimonies’ from those who state they have been ‘delivered’ from homosexuality in Joshua’s church but no statement of condemnation towards homosexuals can be found attributed to the popular cleric.

In answering a question on Facebook about the controversial subject, he diplomatically yet Scripturally stated: "Judge not, so that you will not be judged (Matthew 7:1) We should talk salvation, not condemnation. God hates sin, not sinners. When I say, ‘Do not judge so that you will not be judged’, I mean we should hate sin, not the sinner because sinners can change. If you have killed a sinner by judging him, there will be no opportunity for change. Sinners can be delivered. We should hate the act, not the people because our battle is not against flesh and blood but against the ‘spirit beings’ that cause all these acts.”

Such answer cannot be termed ‘homophobic’ yet it’s equally uncompromising towards core Christian values. Franklin Graham’s brazen declarations have clearly miffed the LGBTQ community, prompting protests and thus cancellations of venues for his UK tour. It remains to be seen if other venues in UK will follow suit and cancel his scheduled appearance in June 2020.

I guess my main point is this – if Pastor TB Joshua was equally fond of making public incendiary remarks towards the homosexual community – or towards the Islamic religion – he probably would have faced a similar backlash to his meeting in Sheffield. Rather, he has a reputation for welcoming all to his services – irrespective of race or religion.

While homosexuality is indeed a controversial subject, if it is addressed with wisdom and discretion, it should not pose a hindrance to Christian events being held in places where gay rights is such a sensitive topic.