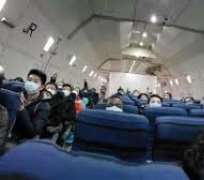 Some foreign airlines suspended flights to and from China on Wednesday as global fears mounted over a coronavirus epidemic that has killed 132 people and infected nearly 6,000.

The announcements came hours after countries began airlifts to evacuate foreigners trapped in Wuhan, the quarantined central Chinese city of 11 million people at the epicentre of the health emergency.

A growing number of governments, including the United States, Britain and Germany, have in recent days advised their citizens to avoid non-essential travel to China over concerns about the viral outbreak.

China has itself urged its citizens to delay trips abroad, with at least 15 countries having confirmed cases of the disease.

The United Arab Emirates reported the first known case in the Middle East on Wednesday.

British Airways was the first major airline to announce a total suspension of flights to and from China, citing the travel advice of the foreign office.

“We apologise to customers for the inconvenience, but the safety of our customers and crew is always our priority,” BA said in a statement on Wednesday.

Indonesia’s Lion Air Group, Southeast Asia’s biggest carrier by fleet size, then said it would halt services to and from China from Saturday “until further notice”.

In Myanmar, the three airlines that have routes into neighbouring China also said those flights would also be suspended from Saturday.

And in one of the most dramatic measures, the tiny Pacific nation of Papua New Guinea announced Wednesday that travellers from Asia would not be allowed in.

However many other airlines said they were continuing their China services.

China has taken other extraordinary measures to try and stop the disease spreading, including bans on tour groups travelling overseas, suspending schools and extending the Lunar New Year holiday.

Authorities also last week imposed transport bans in and around Wuhan in an unprecedented quarantine effort, leaving more than 50 million people shuttered in their homes.