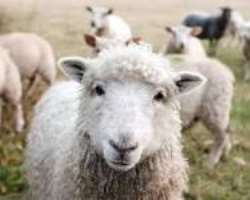 The troops of the Nigerian Army under Operation Lafiyà Dole have handed over 158 sheep and goats, as well as 14 cows recovered from Boko Haram insurgents during a clreaning operation along Maiduguri - Dalwa axis in Kinnduga local government area of Borno state to the state government for onward handing over to their real owners

Handing over the recovered livestock to the Borno state government at the headquarters of Molai Super Camp, Maiduguri, the General Officer Commanding (GOC) 7 Division of the Nigerian Army, Brigadier General Abdul Ibrahim said " we are inviting you here to handover 158 sheep and goats and 14 cows recovered by our troops along Maiduguri- Dakwa axis during operations."

" All these livestocks were recovered by our troops during a clearance operations in January 2020.. We are handing over these livestock to the Borno state governments based on the directives of the Chief of Army staff. Lt General Tukur Buratai and the theater Commander Major General Olusegun Gabriel Adeniyi for onward handing over to their rightful owners ", Gen. Ibrahim said.

The GOC further said " we shall continue to work hard and would deal with the insurgents and recover from Boko Haram what belong to the low abiding citizens. The government is in better position to contact and hand over these livestock to their rightful owners ".

He also reiterated the military warning to the motorists and commuters plying Maiduguri- Damboa - Biu road not to give penny to anybody in disguise of proving logistics to the Army, as the Army headquarters has provided them with the needed logistics, as earlier said by the theater commander and reechoed by the COAS.

Responding on behalf of the Borno state goverment, Governor Babagana Zulum thanked the military for sacrificing their lives to keep the states safe, stressing that the government and people of Borno state will forever remained indebted to the military for restoring peace back to the Northeast.

Governor Zulum.who was represented by the Borno state Commissioner for local government and Emirate Affairs, Hon Sugun Mai Mele said "on.behalf of the government and people of Borno state," I received these livestock for onward handing over to their rightful owners".

" This is not the first time we are receiving such from the military, the other time we received over 300 cows recovered from Boko Haram by the military along Maiduguri- Auno-Jakana axis, where we invited the leadership of Miyatti Allah cattle breeders Association, where we identified and ascertained their rightful owners and handed over back their livestock, we are going to apply same in this regard", the governor added.

He commended the COAS and Operation Lafiya Dole command for reopening the Maiduguri-Damboa-Biu road, as according to him, it will go a long way in easing the hardship faced by the people of southern Borno, as well as Adanawa and Taraba states.