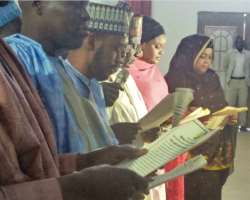 Governor Babagana Umara Zulum of Borno state Wednesday administered the swearing in of twenty six recently appointed Special Advisers and four new Permanent Secretaries with a charge thet they should see their appointments as a call to duty and service to humanity.

The oath of office and allegiance was administered to the appointees by the representative of the State Chief Judge Justice Musa Mustspha at the Multi Purpose Hall of the Government House Maiduguri.

The Nigerian Voice reports that Governor Babagana Umara Zulum was represented at the occasion by his Deputy, Hon Umar Usman Kadafur.

In his remarks shortly after presiding over the swearing in , the State Deputy Governor pointed out that the appointment of the Special Advisers to the State Governor was in line with the desire to fast track the implementation of the ten pact agenda of the present administration.

The deputy Governor reminded the Special Advisers about their roles in supporting government's resettlement programs of the idps back to their ancentorial homes and to come up with implementable strategy and political plan towards executing developmental projects across the state.

Alh Usman Kadafur further urged the appointees to live above board and discharge their responsibilities in accordance with the law by giving sound advice and useful suggestions to the government as and when due .

The deputy Governor also charged the new permanent secretaries to be committed and be role model to the other work force to emulate and ensure punctuality to duty and loyalty in the discharge of their duties.

He further direced all political appointees who were still holding leadership position under the ruling party to immediately tender their resignation from such position.

Earlier, the Secretary to the State Government, Alh Usman Jidda Shuwa in an opening remarks said the appointment of the Special Advisers by the State Governor was in line with the constitutional requirements and part of the Governor's efforts to facilitate speedy execution of his policies and programs.

And the swearing in of the Special Advisers was to meet the necessary constitutional duties to enable them to officially commence the performance of their assignments.

.
In his vote of thanks on behalf of the appointees, Hon Tukur Mshelia thanked Governor Babagana Umara Zulum for finding them worthy of the appointments and assured that they will justify the confident reposed on them.