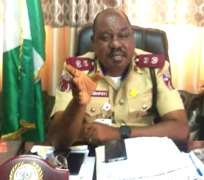 The Federal Road Safety Corps (FRSC), Anambra State Sector command has started the implementation of 'Operation Number Plate Verification,' an exercise aimed at verifying the validity of number plates of vehicle plying in the state.

The state's Commandant of the FRSC, Corps Commander Andrew Kumapayi disclosed this in an exclusive interview with our correspondent at the FRSC headquarters, Awka, the Anambra State capital.

He said the enforcement and implementation of the exercise which took effect from 1st January, 2020, is a resolution and directive from the FRSC National Headquarters on enforcement of new vehicle number plates, as resolved by the Joint Tax Board at its144th meeting which held on 28th October 2019.

Corps Commander Kumapayi further disclosed the alternative processes through which one can verify his vehicle's number plate and drivers licence, which, according to him, can either be done via SMS or via the internet. Vehicle number plates, he said, can be verified via SMS by typing and sending 'verifyplateno (space) (the plate number)' to 33324, or alternatively by visiting the website https://nvis.frsc.gov.ng/ , typing in the plate number to be verified in the box provided therein, and clicking the "Submit" button.

Further, he said Drivers licence can equally be verified via SMS, by typing and sending 'NDL (space) Status (space) the Drivers Licence Number' to 33811, or alternatively online by visiting www.nigeriadriverslicence.org , clicking on "Track DL Application Status" on the menu bar, typing the required information, and clicking the "Search" button.

He said, "Here in Anambra, we have started a special operation to clamp down on those who are using fake number plates.

"With effect from 1st January 2020, it would be an offence for any vehicle to bear old or fake number plate. And also, not only fake or old number plates, even drivers licence. So every motoring is expected to verify his to ensure it is valid and as required."

While also acknowledging that cyclists in the state are yet to fully embrace the 'Class A' Drivers Licence, the implementation of which started on 2nd October 2019, the FRSC helmsman said,

"The same clamp down applies to the motorcyclists or tricyclists who are yet to obtain their 'Class A' Drivers Licence."

"We have learnt that what most of them do is that they would go to the Board of Internal Revenue, fill the form and dump it there without coming for physical capturing. But now, we have also started 'Operation Show Your Drivers Licence,' and it is expected that all the defaulters should go back to the drivers licence centre, do their physical capturing and obtain their 'Class A' Drivers Licence, or be ready to face the full weight of the law," he added.

In his resolve to reduce road crashes in the state to the barest minimum, Commander Kumapayi further charged the motoring public and the cyclists to be law abiding, respect the traffic rules, and avoid anything that has the tendency of exposing them or other road users to accident, such as over-speeding, drink-driving, jumping lane, plying 'one way,' making calls or pressing phone while driving, and other such things, as, according to him, life lost can never regained.