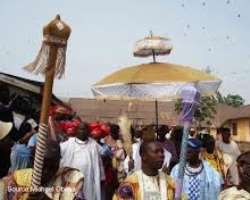 THE ancient town of Ilesa in the state of Osun Nigeria, was on 21st December, 2019 agog when people gathered for the final celebration of the one week long 'Iwude Ijesa Festival' for the year 2019.

The town particularly the roundabout area where we have the status of the great Ijesa warrior Obokun and the main gate that leads to Oba's palace were beautifully adorned with posters and banners carrying the photographs and the imprints of Alayeluwa Oba (Dr.) Gabriel Adekunle Aromolaran II CFR, LLB, the Owa Obokun and Paramount Ruler of Ijesaland.

The atmosphere was cool, peaceful and full of excitement with appropriate security measures put in place by men and women of the Nigerian Police Force and other security agents.

Men, women and youths in colorful Egbejoda traditional dresses were seen organizing themselves for the day's Royal procession. Traditional singers and drummers were not left out of the ceremony and Musical Band stands for different society groups stationed in strategic places all along different streets in the town played to entertain visitors and indeed the large crowd of people who attended the occasion.

Chief Afolabi Igberuola, Vice Chairman of the 2019 Iwude Ijesa Festival planning committee had earlier on 6th December, 2019 at a press briefing informed and educated the people on the meaning and importance of the Iwude Ijesa Festival. He said the Iwude Ijesa Festival is an annual event in Ijesaland that gives other Obas, traditional chiefs, societies, the people and visitors from within and outside Ijesaland to meet and pay homage to the king. He stressed the importance and uniqueness of the festival as a great opportunity for the people to meet with the king as he does not come out or seen in public, except on special occasions like the Iwude Festival.

On the festival day, as early as 8.00am in the morning, Obas from neighboring towns and villages, Traditional Chiefs dressed in flowing agbada with colorful neck and wrist beads with their walking sticks or staff of office in their right hands, important guests and dignitaries from far and near trouped into the palace to greet the king and later joined the convoy of the king’s Royal visit to selected Chiefs and Chieftaincy houses in the town of Ilesa.

The newly constructed and renovated king's palace wore a new look. The king's modern day car park slot for visitors were filled up with different brands of cars. Close to the King's palace is the Civic centre still under construction-a hall of about 2,500 seat capacity for social events or functions (Marriages, Conferences, Seminars and Meetings.)

The 'Town hall' was well painted and decorated and pavilions were erected for the different societies, groups, guests and dignitaries for the evening or night party and entertainment that will take place after the Royal procession at 5.00pm.

The theme for this year's Iwude Ijesa Festival Chief Afolabi says is: 'Unity, Peace and Progress for the growth and Development of Ijesaland.'

He noted that Ilesa and other small towns and villages in Ijesaland are growing to become well developed cosmopolitan mega cities and to enhance growth and development, the people must be friendly, united and peaceful.

This year's Iwude Festival celebration was unique because it had in attendance all Obas from towns and cities across Ijesaland(Ijebu-jesa,Ibokun, Ipetu, Ifewara, etc.)

It was really an opportunity for the king to meet his people, mend broken bridges and strengthen relationship between fellow Obas, their Chiefs and the people to enhance working together for the progress of Ijesaland.

The development we see today in Ilesa is attributed to the achievements and hard work of His Royal Majesty, Oba Adekunle Aromolaran II, the chairman Osun state council of traditional Rulers, the Chancellor, Modibbo Adama Federal University of Technology, Yola , Adamawa state, Nigeria, the Owa-Obokun Adimula and the paramount ruler of Ijesaland, an Economist, Lawyer and with great honor of the commander of the Federal Republic(CFR.)

The Sawe of Ilesa, High Chief A.A.Akinola at his 80th birthday interview in October, 2019 expressed his delight at the great development that has taken place in Ilesa since the rein of Oba A .Aromolaran II. He commended the efforts of the king and most importantly the support, and contribution of individual Ijesa sons and daughters at home or abroad, societies and associations in Ijesaland for the great achievement.

High Chief Akinola urged Ijesa sons and daughters at home and in the diaspora to return home and join hands for the success of the current development programme taking place in Ijesaland to improve the livelihood of the people and generation of children yet unborn.

The Royal procession and its convoy left the palace by 10.00am, stopped and stayed a while at Yeyerise's Chieftaincy House and with pump and peagentry with much traditional display by Chiefs uniformily dressed carrying their staff of office moved to Obanla's chieftaincy house.

The King's Royal procession visited Ita-Okesa, Idi Ose in Ijamo street, Ijoka and waited a long time at Lejoka'sChieftaincy house where the king and his entourage were entertained.

The king visited Salotun and finally addressed and prayed for his people and the teeming crowd who came from different places for the festival at the pavilion near the central Mosque in Ilesa.

The evening program after the Royal procession attracted a mammoth crowd involving Ijesa sons and daughters at home and in the diospora, guests, dignitaries and visitors.

The Osun state governor, Alhaji ’Gboyega Oyetola was represented at the occasion by his Deputy, Dr. Bernard Talabi.

In his speech at the ceremony, the governor thanked the people of Ijesaland for their love and support for his administration, he urged them to be peaceful, united and work together not only for the development and growth of Ijesaland alone, but also for the growth of Osun state and the country as a whole.

Societies and groups entertained and paid traditional homage to the king as a mark of honour.

The king prayed for all who attended the festival, he admonished all sons and daughters of Ijesaland particularly those in the diaspora to always come home and support programs initiated for the development of Ijesaland. He wished them all journey mercy back to their different destinations.

Chief Afolabi Igberuola in his vote of thanks expressed his appreciation and gratitude to guests and dignitaries for the love shown in honoring their invitation. He particularly commended the support of all who immensely contributed to the success of the celebration.