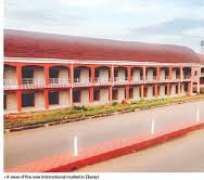 At last Ebonyi International Market, a standard market for the promotion of sub - Trans sahara trade linking other African countries is completed and ready for traders to relocate to.

The market which is strategically located on a road that leads to other parts of Africa with modern facilities has over 8000 shops.

The process of relocation of traders from the popular Abakpa main market, Abakaliki has just commenced in earnest and arrangement put in place by the state government to ensure smooth relocation to the International market.

Part of the modern facilities constructed into the market by the state government include banks, hospital and overhead bridges and car parks to ease traffic congestion in the market.

A release signed by Chairman of the Central Committee for movement of traders into the International market and Secretary to the state Government, Dr. Kenneth Ugbala, traders will start relocating to the market from 3rd of next month.

The statement said traders that deal on textile and baby wears, fancy dealers, provisions and Wine beverages, cosmetics and attachment dealers will move into the market on the 3rd of next month while those that sell stationeries, medicine, kitchen utensils, articles and jewelries will move on 5th February.

Following the completion of works at the Margret Umahi International Market and the agreement with the various market unions, the movement of Abakpa and Hossana Traders to the new International market has been scheduled as follows:

The release further noted that traders that deal on foot wears and Rubber slippers, electronics, electrical, phones and accessories will relocate to the market on 6th and 7th February.

Traders that sell bags, luggage, miscellanaus goods and bicycle parts, kanda, food stuff and allied commodities will move on 8th, 9th and 10th February, 2020 according to the statement.

“The traders are advised to adhere to the arrangement and comply strictly, as government will not adjust the time table again”, the statement reads in parts.

Speaking to journalists in Abakaliki, Special Assistant to Governor Dave Umahi on Media, Francis Nwaze said that one of the best things that has ever happened to Ebonyi state is the completion of the International market because of the economic fortunes it offers the state.

Mr Nwaze pointed out the market will provide employment opportunities for the youths, increase the state Internally Generated Revenue(IGR) and connect the state to the world, describing the market as macrocosm of microcosm.

He noted that investors are already trooping into the state to invest in the market.