No! To Restructuring, We Want Plebiscite. 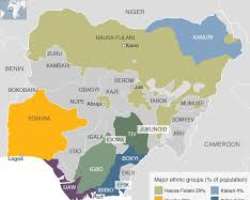 "The great revolution in the history of man, past, present and future, is the revolution of those determined to be free."

- Jim Rohn
Do Yorùbá really want Oòduà Nation? Do they really want to get out of Nigeria? Is this the desire of their majority? Or this demand is just a rant of the vocal few? What exactly do the Yorùbá want? Nigeria or Oòduà Nation?

What does the majority Igbo want? Do they really want Nigeria? Or they want their Biafra? Is the noise about Biafra that of the grassroots or "misguided" few? What exactly do the Igbo people want, Nigeria or Biafra?

Do the ethnic nationalities in the Middlebelt still want Nigeria or they want out? Are they excited to remain the willing tools of feudalism only to be beheaded when they are no longer needed? What exactly do they want? Nigeria or their freedom?

Well, there is only one way to find out. - plebiscite. In any polity, including the ones presided over by divine Kings and or emperor's, the people are the ultimate. They are the final arbiters. They determine the survival or the eventual death of a polity by submitting to the extant authority or by rebelling or revolting against it.

Cross sections of the Nigerian State, through their various leaders have been asking for Restructuring of this Country for a long time. But those identified by the Great Osagyefo, Kwame Nkrumah, as neo-colonialists, the purveyors of the next stage of imperialism, who are in control of the appurtenances of political power in Nigeria would not allow it. The reason they are against Restructuring is that the subsisting crooked structure is to their advantage.

All the taxi drivers of Yorùbá extraction, all the bricklayers, the students, the market women, the nurses, the doctors, the lawyers, the architects, the unemployed, the civil servants, the farmers, the tailors, the vulcanizers, the carpenters, the painters, the traders et al want to have a say in the direction of their destiny. It is their right. They are entitled to it and they would have it. Yes, the people must decide.

Currently, the Yorùbá Nation wants its freedom. They want to extricate themselves from the Fulani bondage. They want to disengage from all aprons of feudalism. They want an end to apartheid system where the minority is ruling the majority using weapons of war, by opting out of Nigeria. It doesn't make any sense to be in a marriage where the parties involved are diametrically opposed to each other and the relationship itself.

The Yorùbá people would like to discuss the possibility of an Oòduà Nation as a matter of courtesy. But essentially, the final decision is theirs. The choice is theirs to make. And at the time they choose. The Yorùbá are determined to be free in a Nation they could call their own and where they could dictate the directions and the dimensions of their destiny.

The Yorùbá want to control their resources by themselves. They are tired of their resources being taken to the North of the Niger to sustain rabid incompetence and rancid values that are foreign to them. We don't think we are better than any group of people. But we reserve the right to live our lives according to our own dictates, our own values and Culture.

At this point in the membership of the Yorùbá Nation as a component of this subjugating gizmo called Nigeria, what we want right now is a plebiscite. We must be allowed to decide. If at the end, we decide to stay in Nigeria, then we would sit down to determine how. At that point, anyone could speak of Restructuring. But right now, plebiscite is what we want. We should not and could not put the cart before the horse. For the cart to be moved, the horse has to come first.