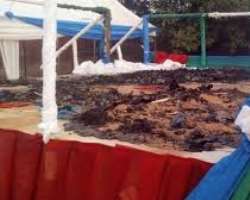 Reports from Auchi, the venue to be used for a political rally by the All Progressives Congress (APC) in Auchi, Estako West local government area has been set ablaze by suspected thugs.

According to reports, the National Chairman of APC, Comrade Adams Oshiomhole, was scheduled to receive the defectors at the venue on Saturday.

However, the suspected hoodlums reportedly set the venue ablaze after firing shots.Two cars, over 1000 chairs, canopies and the stage were burnt.

Reacting to the situation, the factional chairman of APC in the area, Alhaji Abubakar Akokhia, said the rally would still hold despite activities of the suspected thugs.