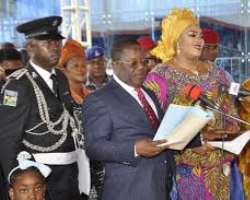 Chairman, Southern governors' Wives Forum and wife of Edo state Governor, Mrs Besty Obasake said the essence of the forum is to collaborate among the members to bring new ideas to assist their husbands in the business of governance.

Mrs Obaseki made this remarks when the Southern Governors' Forum paid courtesy visit to the Governor of Ebonyi state, Chief David Umahi at the Executive Council Chambers, Government House, Abakaliki

She stated that when the wife of the President, Mrs Aisha Buhari came on board and met the association of Northern Governor' Wives, she encouraged them to replicate same in the South.

Wife of Edo state governor and founder of "No pikin go die foundation" also said that they were in Ebonyi to support the wife of the Governor on her empowerment programme adding that that is the way they can make impact.

She disclosed that their programme is a whole initiative of Southern Governors' Wives Forum which she said had formed a strong bond among them and forced them to integrate in national activities.

"The main focus of this meeting is to support our sister in what she is doing and participate in empowerment. This is the way to create impact amongst ourselves.

"The programme is a the whole initiatives of the platform has form strong bond in leadership amongst us.

"Wife of the president when she came onboard and meet an association of Wives of northern governors asked us to establish this. The whole essence is for us to impact,to collaborate,to interact to bring new idea to assist our husbands.

In his remarks, Ebonyi state Governor, Chief David Umahi frowned at the rate enemies of the nation spew dissenting comments about their leaders, saying such expression of ingratitude portends grave danger to the entire country, especially as President Mohammadu Buhari intensifies efforts in his war against graft.

The governor said with all sincerity, the people has every reason to smile and be happy with the president's posture against graft.

"When Transparency International rated Nigeria very low in corruption, it is not as if we are very corrupt as they said, it is because our leader has changed tactics

"Mr. President has done quite a lot in real fight against corruption"

"He has done less of party matters, but more of nation building, he has our respects, he has our support.

To sustain the war against graft, he said "we need to change tactics, we need to stop media trials

"We need to do more of proactive corruption fighting than reactive one".

While urging the women to tow the path of pillar and support for their husbands, Umahi lauded the nation's First Lady, Mrs. Aisha Buhari saying, she is a detribalised woman.

On her part, the hostess and Vice President of the Forum, and First Lady of Ebonyi State, Chief Mrs. Rachel Ogonna Umahi, commended the women for coming to Ebonyi State for the summit.

The meeting was attended by the members of the Forum which include Wives of Edo state Governor, Mrs Besty Obaseki, Enugu state, Mrs Monica Ugwuanyi, Delta state, Mrs Edit Okowa and that of Abia state, Dr Mrs Nkechi Ikpeazu.