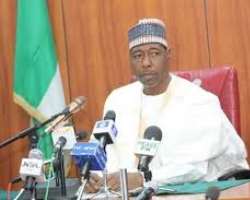 The Nigeria Labour Congress, (NLC), Borno State on Friday confirmed that most workers in Borno state have received their salaries for January 2020 with a new minimum wage of increase implemented by Governor Babagana Umara Zulum.

Chairman of the NLC Borno State Council, Comrade Bulama Abiso gave the confirmation in a message he personally conveyed to the governor’s media team on Friday morning for the purpose of dissemination.

He said: "Borno state government under the able leadership of Prof. Babagana Umara Zulum has commenced implementation of a new minimum wage of 30,000 for workers and its consequential adjustments."

" The organized labour in Borno state appreciates the Governor for keeping to his pledge to make workers welfare as part of his priority.

"We urge all civil servants to reciprocate by re-dedicating themselves to duty” the NLC chairman wrote.

Investigation revealed that as at yesterday, Thursday, 23rd January, 2020 , Governor Zulum paid Borno state workers their salary for the month of January 2020 with N30,000 minimum wage.

A state civil servant with the ministry of agriculture, Malam Mauna Adam confirmed to our The Nigerian Voice that he had already received his January 2020 salary as at 23 January 2020 through bank alert and with increase or difference compare to the December 2019 salary because of the new minimum wage payment that was effected this month of January 2020.

Another civil servant with the state owned Ramat Polytechnic Maiduguri , Malam Abdulhamid Chul said "yes I collected my January 2020 salary with a difference or increase due to the implementation of the new minimum wage payment this month January 2020".

"Except that, the difference is not much as expected for the senior and middle staff. Those who enjoy the new minimum wage are mostly the junior workers as their differences or gap in salary payment is high compared to the senior staff and others that already receive monthly salary above N39,000.",.Chil said.