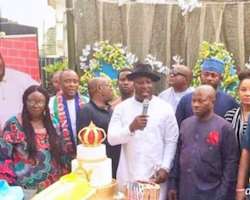 Speaking in a well-attended Birthday reception that attracted the crème de la crème of society and high net worth individuals, the celebrant Sobomabo Jackrich expressed gratitude to all and sundry for making out time to attend his birthday anniversary, adding that he will continue to pursue the cause to actualize the legacy of leadership. The former warlord took a swipe at the Governor of Rivers state as he berates his leadership style in Rivers state. According to him, the present administration of Governor Nyesom Wike has demonstrated a lack of capacity to entrench a sincere, transparent and all-inclusive leadership style that will unite the diverse ethnic group and place the state path of unity, peace, and progress.

He lashed out at the governor on his recent denigration of the highly revered traditional institution and rain of abuses on custodians of our culture, saying the display of disregard for such highly revered individuals is totally condemnable. Hear him: Rivers state needs a credible leader that is God-fearing, one that feels the pulse of the people; not one that is vindictive, sentimental and arrogant like our governor has continued to demonstrate”, he said.

Speaking further on the Trans Kalabari road project, he called for greater transparency in the award of the contract, adding that the project had become a kind of lingering charade. According to him, this is the time to speak out and end the Trans Kalabari road treachery. He said the Kalabaris are now wiser, hence they are demanding to know the worth of the Trans Kalabari road contract, and the name of the contractor handling the project, as stakeholders to ascertain the veracity of the award and follow the development closely. According to JACKRICH also known as EGBERIPAPA, "WIke Should not hide Under Looming EFCC Probe To Award Trans Kalabari Road in a hurry, this time we want to Know the Worth Of the Contract and the Contractor handling it", warning that the Kalabaris will embark on protest if the governor failed to make public the monetary value of the Trans-Kalabari road contract for the purpose of transparency. The 42nd birthday bash event also witnessed solidarity speeches from the candidate of Labour Party in the last Guber election in Rivers state, and business mogul, Chief Eng. Isaac Wonwu who described him as a special breed and amazing young man spearheading the cause of his people and justice.

Chief Wonwu who attended the event in with the State Chairman of Labour Party in Rivers State,, Prince Favour Reuben and other party members, lauded Sobomabo Jackrich for keeping up with his passion to ensuring the development and welfare of his people. Immediate past National Secretary of IYC and global convener of Niger Delta Waterways National Security Summit, Engr Emmanuel Bristol Alagbariya in his birthday message said the entire Ijaw Youth Council is proud to identify with him and his soaring potentials, especially as one whose foundation started in IYC, Amanyanabo of Okpo town and a Chieftain of Kengema Osaki, HRH King Diamond Tobin-West while speaking with other Kalabari chiefs behind him, congratulated him on his birthday saying “this is our son in whom we are well pleased, he said the entire Kalabaris are behind him in solidarity, especially for providing a voice and his untiring efforts towards advancing the cause of the Kalabari ethnic nationality and others.

For beautiful artist and Kalabari damsel, Ibinabo Fiberesima, Sobomabo Jackrich is a blessing to many, His Philanthropic nature has really put smiles on faces and reduced the sufferings of so many people in this region and beyond through Education support, skill acquisition training for Youths, financial support, and programmes that have assisted individuals and stimulated economic growth of Rivers State. The highlight of the event was the presentation of seven whopping awards by the College of Bishops in recognition of giant strides in society, a partnership appreciation award by the Enough -is-Enough/Niger Delta Waterways National Security Summit Group, a special souvenir by KUF AKULGA among other awards, including appreciation dance display by children, cultural groups and renowned musicians.