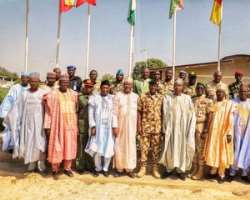 Governor Babagana Umara Zulum of Borno State has commended the Multi National Joint Task Force (MNJTF) troops for their gallantry and bravery in the fight against Boko Haram insurgency at the Lake Chad Basin zone .

The governor made the commendation Tuesday in a statement issued by the MNJTF, N’Djamena, Chad Republic, Chief Informatiion Officer (CIO), Colonel Timothy Antigha. He said that 10 years of insurgency has claimed many lives and displaced over 30 million people within the Lake Chad Basin Commission (LCDC) member countries of Chad, Niger, Cameroon and Nigeria.

The CIO added that Zulum's visit was to explore means of collaboration and to coordinate with Chadian authorities in regional stabilization strategy of commission. According to him, Zulum said that without the ‘commitment and resilience of the troops, the ongoing counter-insurgency and terrorism operations would have been truncated and may have led to destruction of more lives.

The statement said the governor urged them to remain resolute in the fight against Boko Haram and Islamic State of West Africa Province (ISWAP) to restore peace in the Lake Chad Basin.

Colonel Timothy added that, Zulum prayed for the repose of the fallen heroes whom he said that have paid the supreme price to protect territorial integrity of the nation against foreign aggressors in the region.

The Govenror further expressed his was satisfaction with level of synergy among member countries of joint task force while appealing to them to end Boko Haram and Islamic State of West Africa Province (ISWAP) insurgency.

The statement added that the governor pledged his administration’s assistance to quicken the restoration of peace in four-member countries of Chad, Niger, Cameroon and Nigeria, saying," Borno’s assistance will be the implementation of livelihood projects for Internal Displaced Persons (IDPs) and refugees in camps and host communities."

Zulum added that besides restoration of livelihoods in region, there would be a follow a up to regional stabilization projects, including border trade and roads network.

In his reamrk, the Force Commander, Major General Ibrahim Yusuf assured the governor that the joint task force will intensify its operations, until Boko Haram insurgency is eradicated from the region.

“The Lake Chad Basin will be peaceful again for the good people to resume their normal lives with various socio-economic activities,", Zulum said.