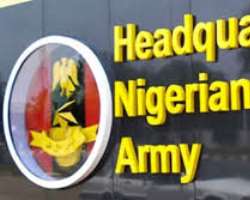 The Nigerian Army has finally broken silence on the incessant attacks by gunmen suspected to be Boko haram insurgents, armed robbers and bandits along Maiduguri - Damaturu highway, the only route linking Borno State with the north west, north central, north south and even south south.

The Theatre Commander, Operation Lafiya Dole, Major General Olusegun Gabriel Adeniyi said at a press briefing with journalists Monday evening that his men have taken frantic measures to address the heightening security tension in the area.

Adeniyi also added that the Nigerian Army is fully aware of the situation on ground and is working assiduously to curtail the situation.

He however said, "the command knows the reasons for the attacks; how the Boko Haram carry out their attacks; their plans and what people should also do."

The Theater Command further explained that motorists should not stop at any check point except those officially designated at certain locations along the highway, noting that, the only official checkpoints are located at Benisheikh, Jakana, Auno, Mainok and Njimtilo towns and villages along the highway.

According to him, all the checkpoints are located in towns, stressing that, travellers along the route should be cautioned of fake and illegal checkpoints in wastelands and empty bushes while the response squad team are on patrol along the highway.