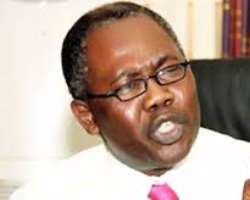 The Economic and Financial Crimes Commission (EFCC) is expected to arraign a former Attorney-General of the Federation and Minister of Justice Mohammed Bello Adoke today in Abuja.

According to a news report by Channels TV, the anti-graft agency has filed a 12-count charge against Adoke at a Federal Capital Territory High Court in Abuja.

Joined as defendants are Aliyu Abubakar, Rasky Gbinigie, as well as Malabu Oil and Gas Limited.

The commission has also filed a separate seven count-charge before a Federal High Court against Mr Adoke and Mr Abubakar.

EFCC filed the charges at both courts in Abuja, after deciding to prosecute the former minister for the role he allegedly played in the controversial Oil Prospecting Licence (OPL) 245, otherwise known as Malabu oil scam.

Adoke was arrested by the EFCC in December last year after returning from Dubai, the United Arab Emirates (UAE) where he was first arrested and detained by Interpol.