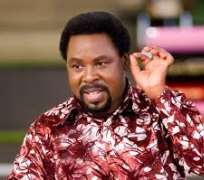 Nigerian Prophet TB Joshua has sensationally declared that "most offerings collected in churches all over the world are a curse, not a blessing."

Joshua, who was speaking to a packed congregation at The Synagogue, Church Of All Nations (SCOAN) was responding to a question raised about why offerings are not collected during his weekly Monday 'Living Water Service'.

"We cannot begin bothering distressed people - I mean, the sick ones, the poor ones - asking for financial support," the cleric explained.

Adding that although it was Scriptural to collect an offering, "The question remains: Whom are we asking for support? The distressed, the sick, the poor?"

Joshua then declared: "You are your 'Thank you' because you cannot live above your word. That is why most gifts today are a curse, not a blessing... That is why you have to be very careful."

Sharing practical examples from daily life, the cleric explained how judging by mere appearance is misleading as people are often pretentious.

"I know people beyond appearance because I look at the heart," he revealed. "Appearance is deceptive."

The video of Joshua's short sermon on YouTube elicited a deluge of responses from followers, many declaring it was the "first time" they had heard a pastor explain such subject matter.