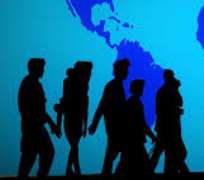 Man from the beginning of time has greatly felt the pull to leave his comfort zone to go to where they can more effectively bring home the bacon. The adage ‘It is greener on the other side’ is apt here. There has always been that pull to leave his familiar surroundings to go to the proverbial land flowing with milk and honey.

The various wars fought throughout human history and the rise of empires like the Greek, Spartan, Roman, Persian, Norse, German, British, French, Russian, Spanish, Byzantine, Egyptian, Carthage etc forced many people to move around from one empire to the other. The captured people most especially were forced by the circumstances of the time to seek refuge in the empires that suddenly became wealthy as a result of their conquests.

The concept of dual citizenship which makes the west an attractive option for many Africans and Asians has its roots in the Roman Empire. At a time in world history, the world was conquered by Rome and her soldiers were all over the empire to keep the peace. Babies born on Roman soil were automatically given citizenship and even the Biblical Apostle Paul was a beneficiary of it. The west which faced a shortage of manpower no thanks to their heavy birth control methods opened her arms to nationals of impoverished continents to replenish their population. Under the administration of Bill Clinton, he introduced the visa lottery to encourage brain drain as the US is a nation built on the back of immigrants. The lottery is still on though Nigeria exceeded her quota about five years ago. Some ‘smart’ Nigerians now pose as citizens of other African nations so that they can apply.

Illegal migration is a huge crisis in Africa as many Africans tired of the terrible conditions of living back home do their best to leave the continent through a hazardous journey through the Sahara Desert and in cramped boats which can easily capsize and throw all the occupants overboard. Some are killed and their organs harvested for sale in the international organ black market. Many women are sexually violated; many are sold into slavery with no hope of ever being bought back. It is an existential hell for most victims of this perilous journey.

The few that make it to Europe discover painfully that the streets aren’t strewn with gold and diamonds. Many enter countries where they face a huge language barrier and they subsist on the economic margins as they barely eke out a living amidst high expectations of their folks back home.

The ones that make it to the English speaking nations like the United Kingdom, United States, Canada, Australia and Ireland discover that their certificates are worthless in those countries. They have to make do with menial jobs while they raise the necessary funds to go back to school so as to boost their chances of a good job that can bring home the bacon and help their families back in Africa or Asia. There is a common joke that the best to have a health challenge in Canada is in a bus or taxi because there are high chances that the driver is a doctor from a foreign clime who isn’t being allowed to practice medicine in the country until he or she becomes certified there. I recall that my aunties had to first work as auxiliary nurses in the UK in the 1980’s when they first got there. Life in foreign climes is far from what the Hollywood movies portray.

I personally don’t have anything wrong with migration as it is a fundamental human right but due diligence must first be undertaken to ensure that the journey will be worth it at the end of the day.

Never has information being so democratized as it is on the internet today and such can be easily gleaned with a phone from the comfort of one’s bed. There should be no room for indolence. Questions like what sort of jobs are in high demand abroad, do I have the requisite skills to be able to attract them if I migrate? What skills can I acquire to make me economically relevant there? There should be a deep soul searching and sincerity in the answering of the questions.

The political temperature is currently anti-immigration which was what informed Brexit in the UK and the rise of Donald Trump in the US. Migrants in this century must have more than enough goodies to bring to the table before they can be fully accepted by their host countries. There is no place for average Joes in this current set up as they are competing with the best from all over the globe including their host community for the ever shrinking job roles no thanks to the revolution of technology powered by artificial intelligence which is a great threat to jobs retention with many roles being declared redundant on a daily basis.

I understand the need to migrate as the leaders back home do not care and one needs to provide a better future for ones offspring but it shouldn’t be done with emotions; rational thinking must come to play here. It makes no sense to jump from frying pan to the fire as they say in Nigerian parlance.

Due diligence and investigations must be thoroughly carried out before embarking on the mission.