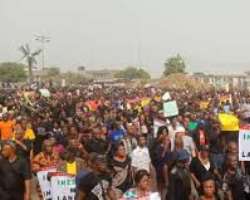 While the Peoples Democratic Party (PDP) threatened to carry out a protest in Abuja on Monday, protesters have trooped to the streets of Owerri, Imo state capital, on Sunday to voice their disapproval with the verdict of the supreme court which led to the removal of Emeka Ihedioha as governor of Imo.

The apex court had on Tuesday nullified Ihedioha’s victory and ordered the Independent National Electoral Commission (INEC) to return Hope Uzodinma, candidate of the All Progressives Congress (APC), as the winner of the election.

Uzodinma placed a distant fourth in the results announced by INEC but the supreme court declared him winner based on the APC candidate’s claim that his votes across 388 polling units were annulled.

Uzodinma was sworn-in as the governor of Imo state barely 24 hours after the verdict.

However, the apex court judgement has continued to spark diverse reactions. please watch the video of the protest in Owerri below: