Between Linda Ikeji and Grace Ajilore 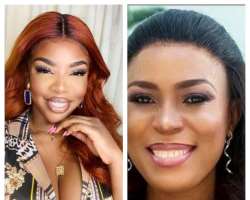 Elizabeth Stanton of the United States was one of the pioneers of the women liberation movement that swept across the country like a wild fire in the heady days of the latter part of the 19th century. The Seneca Falls convention held in New York which she spearheaded largely opened up the movement as the idea spread to other parts of the European continent.

Today, the result of that vision which Stanton didn’t live to see is the popularization of the feminist movement which has now gained deep roots in Africa.

Radical feminism is the type that espouses that women don’t need men – it is an open secret that there are many sperm banks in different parts of the world where ‘successful’ women purchase sperms according to their desires as they don’t need the father to be part of the child’s upbringing. Linda Ikeji
Linda Ikeji, the Queen of blogging in Nigeria needs no introduction at least to the average literate Nigerian. Her forte is gossip and light hearted news and she has become a billionaire in naira for this. She was among the pioneers of blogging and the vision has since paid off after she got her first advert after four years of consistent blogging. Once upon a time she was overtly critical of baby mamas and praised herself to the High Heavens for her ability to abstain from sex. She never failed to tell her readers that she was a secondary virgin and she never really enjoyed intercourse as a result of a female circumcision she was subjected to in her much younger years. She urged young girls to keep their bodies ‘holy’ for their future husbands and they shouldn’t succumb to the lure of pre marital sex no matter how tempting it may be. She even said one time that she cannot marry a man who doesn’t have at least five hundred million naira in the bank and that she cannot live in a flat in Lekki. To the shock and chagrin of her followers who are mostly women, she became pregnant for Jeremy Sholaye, a Lagos based businessman. She had become one more baby mama; why didn’t she practice what she preached? Why lead impressionable girls and leave them in the lurch after securing her own nest? Alas, she is still a celebrity who can do no wrong and so in our collective short-sightedness, her ‘sins are forgiven.’ Grace Ajilore
Grace Ajilore is a ‘relationship expert’ who has garnered a massive following on social media especially on Instagram. Her vlog is a must watch for many young and even mature single ladies who want to know the latest in dealing with their boyfriends or potential dates and spouses. She is well known as a man basher who views all men as scum and encourages her listeners to do the same. To the surprise of her teeming viewers, she went away on leave and then resurfaced some months later with a pregnancy for an undisclosed man. The level of hypocrisy is extremely sickening. Why does she bash men and still open her legs for the same men that she so ferociously attacks?

Females in Nigeria can be quite impressionable and vulnerable and there is need for them to be cautious about the activities of these so called social media influencers who may be nothing short of being wolves in sheep clothing.

These female celebrities most times live a fake life as they do so for the camera so as to rack up more followers and views which will ultimately translate into more money for them. These naïve followers should be wary of their heroines as the latter doesn’t have their best interest as they view the former as just one more follower, subscriber or view – the sad testimony of being a mere statistic.

Professor Wole Soyinka called my generation a wasted one; much as I was furious at the Nobel Laureate, it is sadly the stark reality as many of us especially the females prefer to be slay queens rather than combining their God given beauty with brains like Dr. (MRS) Ngozi Okonjo-Iweala, Oby Ezekwesili, Amina Mohammed, Ibukun Awosika amongst many other Amazons.

It is high time young girls in the country evolve into a critical thinking force as we cannot allow this generation to be populated by Bimbos who have nothing other than their bodies to offer.

China, Singapore, Malaysia had a great leap forward on the back of their brains – the women inclusive and not on sensationalism that the likes of Ikeji and Ajilore peddle.