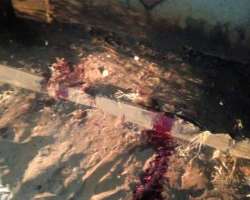 Men of the underworld have killed a young boy for resisting them from collecting his cell phone.

In his bid to resist the attack, the hooligans pulled out a gun and shot at him at close range, leaving him to die in the pool of his blood.

They collected the handset before speeding away. Meanwhile, an activist, Comrade Victor Ojei and some residents have called on the police to resume their stop and search routine on tricycle operators.

"The police should start a stop and search of these keke popularly called tricycle every evening because these thieves works at night, let the police be disciplined and avoid forgetting the TASK they were sent to accomplish", he said.