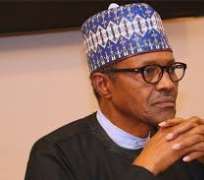 Hearing commenced on Thursday, January 16 at the Federal High Court (FHC), Osogbo, Osun State in the case instituted against President Muhammadu Buhari and four others from obtaining a fresh foreign loan of $29.96billion.

In the suit with No. FHC/OS/CS/1/2020 which was filed by a human right lawyer and a former Chairman of Nigeria Bar Association (NBA), Ilesa Branch, Bar. Kanmi Ajibola, the plaintiff had approached the court today asking for an order of mandamus compelling the president from taking the loan.

Others dragged to court on the issue of $29.96billion foreign loan along with President Buhari by Ajibola were the Senate President, the Speaker, House of Representatives, the National Assembly and the Attorney-General of the Federation.

Ogunlana, a former Chairman of NBA, Ikeja Branch informed the court that the motion was supported by a 58 paragraph affidavits and three exhibits, asking court to exercise its power by granting reliefs sought by his clients.

Some of the reliefs asked for by Ajibola included an order restraining the National Assembly from giving “approval to the foreign loan sought in the sum of $29.96 Billion or any other amount projectedly being for economic stimulus infrastructure use”.

He also urged the court to order the president to avail him information about the local and foreign debt profiles and the defrayment modalities, the list of all the FG projects being executed from the loans taken from 2015 to date, the financial cost of all executed projects from 2015 and the total sum of money recovered so far from the Late General Sani Abacha’s loot, if spent and what it was spent on.

But the presiding judge, Justice Nathaniel Ayo-Emmanuel in his ruling explained that all the respondents in the suit reside at the Federal Capital Territory (FCT), Abuja and that for easy prosecution of the matter, ordered that the case be transferred to the President of the FHC, Abuja for hearing.

Responding, both Ogunlana and Ajibola expressed their readiness to transfer the case to the FCT and promptly do so because of the urgency of the matter.