By Sadiq Abubakar, The Nigerian Voice 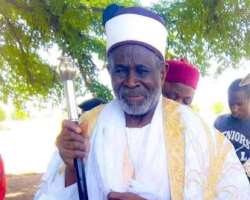 According to reports, the Emir was on a tour of traditional institutions across the Northern part of the country as part of preparations for the official commissioning of Potiskum Central Mosque scheduled for January 18, 2020.

It was reported that, he was on his way to Zaria when his.comvoy was ambushed and attacked by the unidentified gunmen few meters to Fandatio village, about 2 kilometers to Maraban Jos around at about 2:00 am on Wednesday.

At the time of filing this report, it was not confrmed whether the attackers target was the Emir. Other motorists were reportedly affected by the attack.

The news was formally disclosed to the media by a traditional title holder on the Emir of Potiskum’s entourage, Sarkin Yamma Potiskum, Alhaji Gidado Ibrahim at Barau Dikko Hospital in Zaria where the emir was rushed to for medical check up.

Meanwhile, the Kaduna State Police Command PPRO, Yakubu Sabo, has confirmed the attack along the highway but said a statement will be issued after investigation on the attack has been concluded.

Below are photos of burial of Emir's aides that were killed