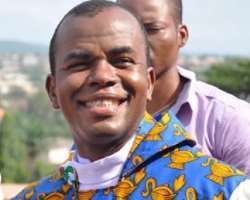 Mbaka was one of the guests at the event held at the Imo State Government House.

The crowd continued to hail Mbaka over his ‘prophecy’ which had come to pass.

The controversial cleric predicted that Uzodinma, the governorship candidate of the All Progressives Congress (APC), will take over from Emeka Ihedioha as Imo Governor in 2020.

His prophecy came to pass on Tuesday, as the Supreme Court sacked Ihedioha and declared Uzodinma as the Governor of Imo State.

Other guests included the National Chairman of the APC, Adams Oshiomhole, former Governor of the State, Senator Rochas Okorocha and governorship candidate of APGA in the 2019 governorship election, Ifeanyi Ararume.

Uzodinma and his deputy, Professor Placid Njoku, were sworn in by the Chief Justice of the state, Justice Pascal Nnadi.