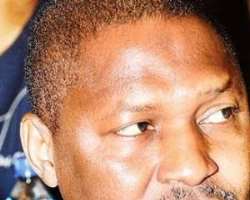 *"This New Nation called Nigeria, should be an estate of our great grand father, Uthman Dan Fodio. We must ruthlessly prevent a change of power. We use the minorities in the North as willing tools, and the South, as conquered territory and never allow them to rule over us, and never allow them to have control over their future"*

-- Sir Ahmadu Bello (Sardauna of Sokoto and Premier of Northern Region) The Parrot of October 12, 1960.

*"The conquest to the sea is now in sight. When our god-sent Ahmadu Bello said some years ago that our conquest will reach the sea shores of Nigeria, some idiots in the South were doubting its possibilities. Today have we not reached the sea? Lagos is reached. It remains Port-Harcourt. It must be conquered and taken."*

I have just read the nonsense coming out of the office of the so called Attorney-General of the Federal Republic of Nigeria, Mr. Abubakar Malami, declaring the Àmòtékùn Project, also known as Western Nigeria Security Network as "illegal."

As some have posited, this is not unexpected, but it is a very terrible but conscious temerity by a dumb and myopic messenger of those who think that they own this crabbed contraption called Nigeria. It is such an arrant nonsense fueled by odious audacity of a slave driver with undue self-estimation and self-value.

Many commentators have been pointing to Hisbah, the religious police in Kano State and are wondering what made that legal and our own Àmòtékùn, "illegal." Such observations are correct. It should worry sane minds who expected a modicum of fairness and balance in the administration of public affairs.

But what the vile vituperations of the villainous Malami showed, is the mentality of an undeserving servant who found himself in a position he never expected himself to be. As a result, he would do anything they asked him to do without thinking, without consideration of the variables in the milieu and without assessing the possible consequences of his actions. That is if he had residual capacity to do so in the first instance.

If the Nothern governors could get together to declare Shariah laws in their states in a Country that is Constitutionally secular and heaven did not fall, heaven would not fall because of this Àmòtékùn Project of the Yorùbá Nation. The worst that could happen is for the God forsaken Country to break up. And it would be a welcome development for all its enslaved ethnic nationalities.

If the sun could still rise from the same East after the introduction of the Hisbah religious police in Kano, nothing would stop the same sun taking its natural course in the West because of Àmòtékùn in Yorùbá Nation. Dogs would still bark like dogs. Goats would still bleat like goats. Birds would still chirp like birds. The worst that could and would happen is that this bedevilled Country would break up. And that would make millions of us happy.

May be this is the time to speak about the useless 1999 Constitution that was imposed on Nigerians without their consent. May be this is the time to throw Nigeria itself into a garbage and let a new dawn arise from its ashes. May be it is time to sing a new song of freedom from domination, subjugation, denigration and exploitation of the Nigerian peoples by itinerant Fulani ethnic predators and their sentries.

I am aware that Mr. Malami might not have the requisite intelligent quotient to comprehend the simple fact that "Laws are made for men, men are not made for laws." If he could understand that, he would have known that he has just perched himself on a ravenous Tiger that would not just swallow him and those who sent him on that destructive message, but that would swallow Nigeria along with it.

The travesty of a government to which this Malami is an attorney general, has demonstrated selective capability to protect the Country. It has exuded a chronic incompetence in all spheres and lives have been cheapened. This Malami is part of a cabal that have used the appurtenances of the Federal Government of Nigeria to engage in ethnic cleansing, killing innocent citizens and bringing in people to occupy villages and lands owned by others.

This Malami is a joker of the highest order. He has no ball to declare the murderous Miyetti Allah, going all over the Country with AK-47 spilling the blood of innocent citizens, as "illegal," but has the putrid impudence to declare the Àmòtékùn Project as one. The first law of nature is self preservation. The Yorùbá Nation has a duty to protect its citizens. The Yorùbá people have an obligation to protect their mothers, wives, sisters, aunts and children among others. They have a burden to do so and do so with their lives if and when necessary.

Malami should hear it now and clear, his doltish declaration is just a gaseous nonsense. It carries no weight in any form or shape. If he thinks that because the control of all the security agencies are in the hand of Northerners, he could engage in such nincompoopish shenanigans, he has some bitter lessons to learn.

Oòduà land is on the march. It is being propelled by the spirit of freedom and liberty. It is being oiled by the confluence of both the spiritual and the physical. All true sons and daughters of Oòduà are now awake and alert. No obstacle of whatever genre would be able to stop us. The journey would be harrowing. It would be utterly challenging. It would demand our sweat and where necessary, our blood. But it is a journey that has been forced upon us. It is a journey that we have to make. And we are making it.

By the way, we recognise all the voices of patriotism all over Yorùbá Nation on this matter, as much as we recognise the deafening silence of internal traitors. Time would apportion appropriate rewards for everyone's contribution as we face the external enemies in Oòduà land.