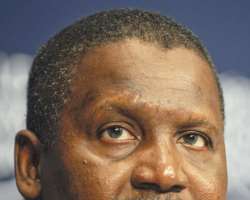 Dangote became the richest man in Africa by being smart, enterprising, and influencing Any Party In Power. He met money at home as one of those sons of Dantata, one of the richest men in Nigeria. Dangote turned millions into billions by being well educated and exposed to the intricacies of politics and the business world. Though each time he was approached to go into politics, he shied away. Why would he join a party when he could control any of them from a distance?

This is a man that spent some of his life abroad, studied and participated in their business process and even got burnt. He withdrew back into Nigerian business which he was more familiar with, to increase the wealth and fortune of the Dantata families. Having got to the point of becoming a billionaire and the richest Blackman in the world, we can all agree that this is an accomplishment of enormous value worthy of respect and praise he is getting today.

Unfortunately, he wants to explore the world Market again. This time putting much more money than any black man at stake, made solely in Africa. Dangote needs not be reminded of the uphill battle he faces as a Blackman in the world of international business and markets. Especially, European and American markets that are rigged in favor of the privileged big boys. There was this Nigerian on 60 Minutes some years ago that made a huge bet and won big on the Wall Street Stock Market. They refused to pay up, based on the excuse that his financial leverage or backing was not solid.

Well, Dangote is not only bankable, he is also a billionaire with enough smart and intelligence to make it even bigger by opening offices in Europe and America. If that is all it takes, Dangote may become the biggest African abroad since Musa Kanka Musa and the Queen of Sheba, the richest humans on Earth of all time. He knows the risk he faces but sometimes most rich black folks get a little complacent in Europe and America thinking they can play by the same rules.

Unfortunately, if all it takes is African riches and intelligence, Africa would be ruling the world and not be the face of poverty today. In that case, it is incomprehensible why a man with so much equity would fall into the same trap that doomed the dreams of many Africans overseas. While it may be true that some of us may exaggerate the vestiges and repercussion of discrimination, only a naive Blackman would not be prepared for it.

Those of us that have witnessed the biggest and most successful black men and woman pulled down for various reasons also point to those still doing well without the same form of harassment faced by other successful Africans, African/Americans or African Europeans. Indeed, any African that wants to be successful would not allow the difficulties of facing discrimination to stop him.

Yet, no Blackman or Black woman has succeeded better than Dangote outside Africa.

The price for success involve many sacrifices many Africans are willing to pay. The problem is when you get to a stage when you think nobody can touch you. Some Africans even think they are protected by all the rules and laws that protect white folks. It is a big mistake that have spelt their downfall. After all, most of us think that since we have paid our dues with blood and sweat, we should be free like anyone else.

This is how African children in Diaspora feel growing up thinking they have as much right as their white friends. We have to be factual without damaging their confidence: the system isolates them for discipline even if they are not doing anything different from their white friends right from the day they enter kindergarten to when they finish college and join the workforce. Discrimination against blacks is real throughout. But children have an inmate view of fairness and younger folks, a stronger view of right and wrong.

So, what do you need to tell a grown man like Dangote that he does not already know? Complacency! It catches up with us when we least expect it. The message to young black males from the personal encounters of Four Star General Colin Powell (Pre. Bush Secretary of State) with the Police in America until they realize his statute and pay their respect: is to remain calm and expect some indignities. Mark Foreman, the policeman during O.J Simpson trial said any black man driving a Cadillac without a three-piece suit was a suspect.

These facts are necessary to drive home the point that no black man or woman no matter how highly placed, would get the same treatment in business as the privileged white boys in control of every nook and corner of transactions especially in high places that control European and American wealth. The game has never changed in hundreds of years. While there is more transparency, odds against Africans has never vanished!

The first observation Dangote would notice is the difference between the African Billionaire on regular business visits and the African Billionaire hustling for more business opportunities to take them by storm or sneakily like European explorers. Even highly recognizable personalities like Oprah and the new black Princess of England with a new baby called derogatory name, would tell you their stories. There is no place on earth more comfortable for a rich black man or woman than Africa. Olohun!

It is so easy to forget the treatment you get outside Africa if you have returned home; only to visit Europe, America and Asia once a while or regularly on business trips. Even then, the demeaning treatments from Immigration and Custom would make you wonder if you are really “all that” or worth the trouble. Suspicion of money laundering, cash in diplomatic bags and in the planes, with or without personal knowledge of African head of states, has eroded any benefit of doubt accorded to African diplomats or billionaires.

More troublesome, it has lent credence to the suspicion of every black doing very well. Those with foreign passports are not exempted from shabby treatment based on the color of their skin. We can blame drug and human trafficking but those heinous crimes are easily committed by the big white boys than Africans. Africans are not the only ones committing crimes but more of their innocent people suffer ignoble treatment as a result. It is one of those penalties you take into consideration when traveling abroad.

Nevertheless, Dangote is a grown experienced man that has made a great deal of money in African countries. It would be a cold day in hell if Dangote returned to Africa with nothing after being dispossessed by the big white boys he decided to play with. When they see a rich African, they see gold, diamond, uranium, cobalt, etc. as an opportunity to make a killing. He might become another prodigal African son that lost his hard-earned money abroad!

Biko Dangote, think about Black Walls Street of the HYPERLINK "https://www.history.com/topics/roaring-twenties/tulsa-race-riot" Tulsa Race Massacre where the city’s black district of Greenwood was considered one of the most affluent African American communities in the United States for the early part of the 20th century.