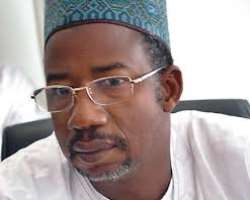 The Governor of Bauchi State, Bala Mohammed, has been hospitalised in the United Kingdom.

This was disclosed on Monday by Mohammed’s Senior Special Assistant on Media, Mukhtar Gidado; though the nature of the illness was not revealed

According to Gidado, a special message was sent to the people of the state by Mohammed from his hospital bed in London ahead of the Supreme Court hearing of the appeal against his election as the governor of the state.

He quoted the governor as having said: “I am in hospital in London but we strongly believe that Allah is sufficient for us and He is Able and Capable to give us victory! Cheers, success shall be ours Insha Allah! Cheers to you all.”