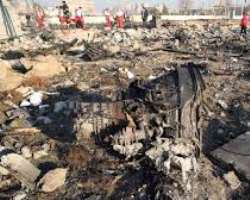 The United States has described the shooting down of the Ukrainian international passenger plane by Iran as a reckless action.

US blasted Iran after the country admitted yesterday that its military actually shot down the airliner killing all 176 people on board.

America said the downing of the plane was a “terrible tragedy.”

Iran on Saturday admitted shooting down the plane but maintained it was unintentional.

This led to protests in Tehran as Iranians called for the immediate resignation of their Supreme Leader, Ayatollah Ali Khramenei.