Launches "Tribute To Our Troops, The Unsung Heroes Concert"
By Sadiq Abubakar, The Nigerian Voice, Maiduguri 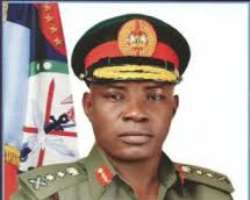 As part of activities lined up to mark the 2020 Armed Forces Remembrance Day, the Chief of Defence Staff, armed forces Headquarters has organized a Project, tagged, " Tribute To Our Troops, The Unsung Heroes Concert" at the Theater Command Headquarters of Operation Lafiyà Dole, Maimalari cantonment, Maiduguri Saturday.

The Chief of Defence Staff, CDS, General Anatomía Gabriel Olanisakin at the flagging off ceremony held at the Maimalari Cantonment Maiduguri Parade Ground was represented by the leader of the delegation from the Defence Headquarters Abuja, Rear Admiral Nuhu .G. Bala

"The Defence Headquarters under the leadership of the Chief of Defence Staff, General Anatomía Gabriel Olanisakin, initiated the Project "Tribute To Our Troops, The Unsung Heroes Concert", with the maiden edition scheduled to hold on 11th January 2020", Abayomi said "the aim of the concert is to enhance public confidence and trust in the military through musical concert, corporate social responsibility and a visit to the troops at the theater by selected entertainment stars."

A cording to him, "this measure will encourage all Nigerians to celebrate our Armed Forces in general and remember our veterans/fallen heroes and their families in particular, by honouring their service to our nation, so that, those at the front lines will feel appreciated and therefore be invigorated and stay committed to the service of our fatherland", Olanisakin said.

The CDS added that in the past 10 years, the Armed Forces of Nigeria has been engaged in the effort of keeping our nation secured by confronting the challenges of Insurgency, terrorism and kidnapping and other unpatriotic acts targeted against the safety and we'll being of the Nigerian people.

He also noted that: "these efforts of our gallant troops have resulted in some of them paying the ultimate price , thereby leaving behind widows/widowers and orphaned children. Unfortunately, these sacrifices have remained largely unnoticed and they have remained Unsung".

General Olanisakin said the artistes' performance will further boost the morale of the soldiers, strengthen them and encourage them to perform more and even better at the warfront as American soldiers used to do to make them strong and combatant ready.

He however pointed out that the aim of the event is recognize and identify with them and their gallantry as well as celebrate with their families.

Guest artists like Vettro, Daddy Shokky and Cptrl. Madugu fillled the gathering with their lyrics, themes and tunes.

The Deputy Chief of Staff, Operation Lafiyà Dole, Colonel A. O Odubiyi in his vote of thanks, thanked the CDS for organizing the musical concert to ginger the troops and the theater Commander for his support.

He urged the troops to be more courageous and prayed for the repose of the fallen heroes.

Highlights of the event were songs , music and dance by the artists and soldiers as well as families of the fallen heroes.