Does GEJ Nurse A Comeback Ambition? 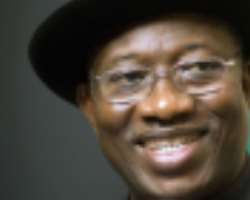 Power is an elixir that is highly intoxicating especially in the African continent where in most countries politics is the most lucrative business. The continent sometimes referred to as the Dark Continent has the highest number of sit-tight leaders in the globe. These leaders having tasted the trappings and lure of power find it an impossible mission to groom successors to hand over to. The likes of Paul Biya, Yoweri Museveni, Robert Mugabe, Mobutu Sese Seko etc are examples that readily come to mind.

The peculiar structure of Nigeria with over 250 ethnic groups has made it impossible for a sit tight leader to emerge though some have nursed the ambition to overstay their welcome in office. We recall that General Yakubu Gowon postponed the hand over date which led to his overthrow from office by the Late General Murtala Ramat Mohammed in 1975. General Ibrahim Badamosi Babangida surreptitiously planned to stay in office beyond 1993 after the June 12 annulment but was forced to step aside.

Former President Goodluck Jonathan was in the news recently when he vehemently denied that he planned to contest the 2023 presidential elections in a bid to return back to power. His spokesman, Ikechukwu Eze issued a statement on his Principal’s behalf where he was quoted to have said:“There was nothing like that. The former President has not made any comments nor spoken to anyone on the coming elections,” he said.

“He is busy concentrating on his foundation, The Goodluck Jonathan Foundation (GJF), and its work of promoting peace, sustainable democracy and youth empowerment in Africa.”

Describing the reports as stale and fake, he added: “If you check online, you will discover that a story with similar headline had been published in the past by few shady online sources.”

“The last time this same story circulated online was before the 2019 presidential elections. It has now come up again.”

“The good thing is that Nigerians already know this to be fake. That is why Nigerian newspapers and serious online news media will not publish such falsehood.”


One wonders why he has to respond to every ‘market gossip’ by obscure bloggers who desperately want to trend so that they can attract traffic to their platforms! Is that how he is going to do? If indeed he had no interest, wouldn’t it have been better he let sleeping dogs lie and not bother with issuing an official response? As we say in Nigerian parlance ‘There is no smoke without fire.’


Goodluck Jonathan may have had a lacklustre performance while in office as there were mind boggling allegations of corruption against some of his key appointees but his decision to hand over power peacefully to the then opposition leader, Muhammadu Buhari made him an instant hero. He was hailed as a defender of democracy and has been active in the international speaking circuit as well as becoming an ambassador for peace where the African Union has made him an envoy in some troubled regions in Africa. Contesting the next elections will greatly belittle his stature and reduce him to a mere power monger who is unnecessarily attached to power.


Africa needs more Statesmen than politicians and he will do his brand and reputation a lot of good if he sticks to his current statesmanlike role. We know he may be under some form of pressure to return back to Aso Rock as some of his hangers on and sycophants may be working day and night to goad him back to power but he should resist it with all his might and not fall into temptation like the Biblical Adam or the Shakespearean Macbeth.


Jonathan is rather unpopular in his native Bayelsa state as the All Progressive Congress Candidate, David Lyon carried the day in the last elections. The former President is accused of not doing enough for the state while he was in power and of backing the serial aspirant, Timi Alaibe who in the view of the youths did little to alleviate their plight while he was in charge of the Niger Delta Development Commission (NDDC). He failed to metamorphose into a godfather there and at the moment has no political base. Charity they say begins at home, if he is so unpopular in his state, how will he win the next elections?

There is an unwritten rule of power rotation between the north and south and by 2023 it will be the turn of the south to produce the next President. This probably explains why he is being convinced to give it another shot. ‘He whom the gods want to destroy will first make deaf’ goes an Igbo adage. He should be sensitive to his current unpopularity and refrain from joining the fray. He should rather act as one of the fathers of the nation and be in the background working for the nation’s interest.

Former leaders coming back or attempting to return to power is now a trend – the likes of Matthew Kerekou, Nicophore Soglo did it in the Republic of Benin with the former staging a successful comeback. Mahathir Mohammed who revolutionized Malaysia came back recently at the age of 92. Jonathan should heed the eternal words of William Shakespeare who said that ‘A good actor leaves the stage while the ovation is loudest.’

2023 promises to be interesting as we will see whether Jonathan’s denial was in good faith. Can we still trust some of our politicians?