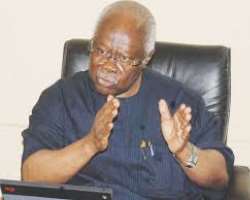 Nigerian politicians don’t love to leave anything to chance and always plan far ahead of time. The dust is yet to settle on the 2019 elections and many of them are already openly or surreptitiously jostling for plum positions in the 2023 elections. It doesn’t matter that the popular Senegal-American artiste, Akon said ‘No need to cherish luxuries because everything comes and goes, even the life that you have is borrowed and you are not promised tomorrow.’ These politicians play god most times as they are so certain that they will live to see their dreams come to fruition.

One name which really has been propped up is that of Chief Olabode Ibiyinka George. His presidential ambition was made known to the public by his aide, Uthman Sodipe-Dosunmu who said that he had the authority of his principal to unveil it on his behalf.

How interesting! Who is really Chief Bode George fondly known as Bee Gee by his supporters and friends?

He first came to national prominence when the then government of General Ibrahim Badamosi Babangida appointed him as the military governor of the Old Ondo State in 1987 which comprised the present Ondo and Ekiti states. He held the exalted office for two years and was said to have been involved in financial sleaze by some of his critics while he held sway as the helmsman.

He went into oblivion and resurfaced into the limelight once again when in 1993 he was appointed as the Principal Staff Officer to Lt-Gen Oladipo Diya who was the deputy to General Sani Abacha. This position made the diminutive Naval Commodore a power broker in Aso Rock and he used the office to advance his interests as a good student of Robert Greene’s ’48 Laws of Power.’

All good things comes to an end goes the age-long cliché and he got his Baptism of Fire when he boss was arrested in December 1997 on a phantom coup charge. In protest he resigned from the Nigerian Navy and went on a self imposed exile for fear of his precious life.

He came back the following year after his nemesis, Abacha passed on and joined the Peoples Democratic Party (PDP). This was not a popular decision among the Yorubas as most of the leading progressives were members of the then Alliance for Democracy which was an offshoot of the Action Group and Unity Party of Nigeria. They sold themselves well to the masses and greatly invoked the name of the late sage, Chief Obafemi Awolowo to massively sweep the votes of the region and had all the six states in its kitty.

Chief Olusegun Obasanjo was sworn into office on the 29thof May, 1999 and he created the office of the Chief of Staff modeled after the American presidential system of government where the office was copied from. George initially lobbied very hard to be the nation’s pioneer Chief of Staff to the President but he lost out in the power struggle as the Ebora Owu preferred Major-General Abdullahi Mohammed to occupy the highly exalted office. Obasanjo encouraged him to seek a position within the party and he subsequently became the National Vice-Chairman of the PDP in the South West. He once famously boasted in the run up to the 2003 elections that his party will capture the south west. His critics blasted him to no end as the language was one of conquest reminiscent of the ignoble military rule.

The PDP won in five states out of six in the south west in 2003 and his fortune bolstered greatly as he was made the National Deputy Chairman South in addition to being the Chairman of the Nigerian Ports Authority described by many political pundits as a juicy portfolio.

His fortunes nosedived after his mentor, Obasanjo stepped down in 2007. He was arrested by the Economic and Financial Crimes Commission (EFCC) and was incarcerated for financial misdeeds while he held sway as the NPA Chairman. He blamed his travails on Obasanjo who ironically gave him his first taste of the political limelight.

He bounced back when Goodluck Jonathan came to power and ensured that his favourite wife, Roli was appointed as the Director-General of the Nigerian Drug Law Enforcement Agency (NDLEA) – another juicy appointment much to the chagrin of his foes and opponents.

The 2015 elections hit him hard as his party lost out and he had no base in his home state of Lagos to fall back on as it has always been in the grip of the progressives. He was like fish out of water as he grappled with the day to day reality of being out of power.

He attempted to bounce back by becoming the National Chairman of the PDP but pulled out at the last minute when he saw defeat staring him in the face as Governor Ezebunwo Nyesom Wike smartly hijacked the process and imposed his stooge in the person of Uche Secondus. He has been quiet since then and was out of the limelight till this surprising news of his 2023 presidential interest.

George has no base as he is currently so unpopular in Lagos and cannot even win his ward in a free and fair local government election. The PDP has never won the state despite the billions of naira committed for the purpose. Charity begins at home. How can he win the elections when he can’t deliver his ward? He has no known national political structure and was only powerful because of his access to both Presidents Obasanjo and Jonathan – he didn’t leverage on this to build a vast network that cuts across the six geopolitical zones. How on earth will his newly found dream come to pass?

He will be 77 going on 78 by 2023 – will he still have the strength for the grueling campaign? The National Assembly is considering a bill to prevent politicians from 70 and above from contesting elections. If it sails through, it will sound the death knell on his ambition.

He has the stigma of being an ex convict which his opponents could use against him to get him disqualified through the courts. Is he just playing to gallery to constantly be in the news to maintain relevance by flying the kite?