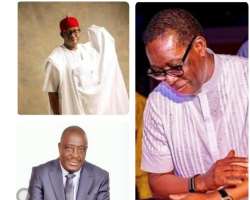 The Hon. Commissioner representing Sapele, Ethiope West and Okpe local government areas in the Board of Delta State Oil Producing Area Development Commission (DESOPADEC), Hon. Joyce Overah, has congratulated Dr. Ifeanyi Okowa, on his victory again at the Supreme court, while advising Chief Great Ogboru to quit politics and take up other ventures.

Hon. Overah who was addressing news men immediately after the supreme court dismissed the petition of Chief Great Ogboru said that the All Progressive Congress (APC) gubernatorial candidate for the last general elections has distracted governance in Delta State for too long, stating that it would be best for him to quits politics.

Overah said that the APC gubernatorial candidate has made Delta State to look like a state without principles where anyone could come from overseas or wake up one morning and say that he wants to be governor.

He said that Ogboru has been on his political agenda right from the time of the former governor Chief James Onanefe Ibori down to Chief Emmanuel Uduaghan and currently to the incumbent governor.

Filing one petition to another from appeal to supreme, thereby dragging the state into series of litigations.

The DESOPADEC Commissioner said that after the first tribunal judgement, he thought that Chief Ogboru would embrace the governor and partner with him to develop the state.

"His projects speaks volume for him. In every local government area there are projects commission ,ongoing, and new projects that are been initiated by Dr. Senator Arthur Ifeanyi Okowa.

"Dr. Okowa has raised the bar of governance since the foundation was laid down by Chief James Onanefe Ibori. I must congratulate the governor for his well deserve victory at the supreme court which has put a rest to Ogboru's zeal to govern Delta State", he added.