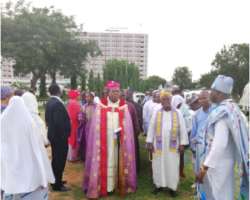 Pentecostal Arch-Bishop of South- South, Dr. Julius Ediwe, has showered praises on President Muhammadu Buhari for remarkable successes recorded in the war against insurgency and religious tolerance among various groups across the country.

Dr. Ediwe who is also the Grand Patron of the National Inter- Faith and Religious Organisation for Peace spoke on behalf of the group in a press conference on Wednesday.

In his speech titled “Saluting the efforts of President Muhammadu Buhari in the fight against terrorism and religious tolerance in Nigeria”, the cleric reckoned that Christian and Muslim co-existing peacefully regardless of religious and ethnic affiliations over the years is the handiwork of Mr President.

He added that since President Buhari assumed leadership in 2015, the country has become more united and focused amidst the myriads of challenges and evil permutations confronting it.

Dr. Ediwe, on behalf of the National Inter-Faith and Religious Groups, lauded the effort of President Buhari and urged him to continue to do more in the overall interest of the country.

The respected preacher pointed out some critical sectors, such as the “leadership of the Nigerian Military headed by General Gabriel Olonishakin, as well as the Governor of the Central Bank of Nigeria, led by Godwin Emiefele”.

According to the clergy, Nigeria never witnessed such transformation as experienced under President Muhammadu Buhari.

Dr. Ediwe, however, urged those that are bent on causing disaffection in the country to support the current administration and spend more time interceding for President Buhari.