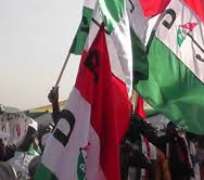 In a statement released to newsmen in Abuja by the National Publicity Secretary of the group, Mr. Innocent Edwin, the group said, the apex court has upheld the electoral mandate freely given to Governor Ishaku by Tarabans in last year's governorship elections in the state.

While re-echoing the position of it's founder, Senator Aisha Jummai Alhassan, the group called on all politicians in the state to put their differences aside and join hands with Governor Ishaku to move Taraba State forward.

The statement further noted that democracy is not all about contesting elections but also accepting it's outcome in good faith; especially when there are not favourable to our ambitions.

It however congratulated the governor on behalf of it's founder, Senator Aisha Alhassan saying the victory is a victory for good governance, development and peaceful co-existence in the state.