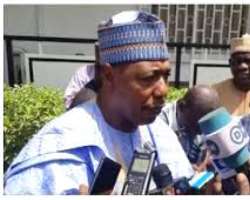 Borno State Governor, Professor. Babagana Umara Zulum has appealed to the federal government not to relocate Mainok or Jakana communities located along the road envisaging that relocation of the people would mean closing the road and link to Borno state from Yobe State and other neighbouring states being the only major highway to the state.

He also opined that the state government is totally against the evacuation and displacement of the people of Mainok and Jakana villages of Konduga LGA of the state over alleged harbouring of Boko Haram insurgents and incidences of ambush on the highway.

Zulum who made the appeal in Mainok town Tuesday said, " the Borno state government is against the evacuation and displacement of the people of Jakana and Mainok to Maiduguri ".

"We are appealing to FG and military not to evacuate the people of Mainok and Jakana, communities. As displacing them means closing the only road linking the state from Yobe State", Zulum said.

It would be recalled that the theater commander and the military authorities have been accusing the people of the communities located along the Maiduguri- Damaturu road, especially Mainok and Jakana villages of harbouring Boko Haram Insurgents and their collaborators as well as other attacks on the major road.

The governor while addressing the people of Mainok and Jakana communities Tuesday afternoon said", This morning I was told that the military are evacutung the residence of Minok and Jakana to IDPs camps in Maiduguri city without informing the state government, NEMA, SEMA, Police and DSS".

"That was why I am here today. They are suppose to inform the state government, so that we will prepared for that. I assured you nobody will evacuate you. I have spoke with the Chief of Amy staff, Lt. Gen. Tukur Yusuf Buratai about what the soldiers did this morning to you.", Zulum said.

In an interview with journalists in Mainok, the governor said ", Since 2011, this road has never been closed but today, the military are trying to evacuate the people of this town, which means closing the roads".

"This is the only road linking Maiduguri and other parts of the country. Where are the millions of people living in Maiduguri going get food? ",Zulum queried.

However, while commending the military and other security agencies in protecting lives and property of the citizenry, the governor said "'We are appealing to the Federal government and the military authorities not to evacuate them. We are going to support the military to end Boko Haram Insurgency. "

"They should deploy their men to search the town with a view to identity and arrest the Boko Haram terrorists allegedly being harboured in the villagea", Zulum said.

He therefore appealed to the people of the two villages to cooperate with the military and other security agencies.

The governor also called on them to continue to pray for quick and permanent restoration of peace in the state.

A resident of Mainok and member of the CJTF in Mainok, Musty Wadai said, " we woke up this morning and saw the military gathering and searching us telling us that they are going park us to IDP camp in Maiduguri and burnt down our villages".

" We have not harvest our farm produce and now they trying to evacuate us, leaving behind our produce to Boko Haram to harvest it," Musty said.

Another resident and trader, Kolo Bukar said," We did not do anything and nobody told us anything neither inform us of anything or problem even the Village Head (Bulama) did not know anything about the presence of large number of military men in uniform numbering over 300 .

"They just woke us up as early as 6 am today Tuesday and started shouting and chasing us out of our houses. Asked all of us to move out of our homes including the children, women and disables.

"That we should come out and queue up to enter the four vehicles they came along with. They also sorrounded the village and stationed themselves in every major and access roads within the Community and ordered us to enter their vehicles without any explanation and we have to obey them as good citizens and peaceful as well as obedient people'.

"But twice we were asked again to board and alight from their vehicles still without explanation but we saw them making phone calls. Before around 12 noon just few minutes to your arrivall with the governor on convoy they asked us to come down and they drove away.

"No. There was no attack here and nothing is happening. We live peacefully and quietly without any problem. We go to farm and observe our market day every Friday peacefully. We also guard ourselves against the BHTs. But this morning, we saw soldiers asking us to vacate our houses" Bukar said.

Zulum also stopped over at Jakana village to address the residents on the same issue of relocation and appeals to them to stay calm and go about their normal businesses while urging them to continue to pray for peace in their areas and state at large.