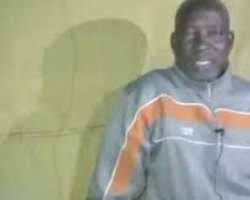 The Shekau faction of the terrorist group Boko Haram has released a video of the chairman of the Christian Association of Nigeria (CAN) in Adamawa state, who was declared missing following a raid on Michika town on 3 January 2020.

In the video, sent to Nigerian journalist and Boko Haram expert Ahmed Salkida, Rev. Lawan Andimi speaks in Hausa and English, stating he is not discouraged “because all conditions [in which one] finds himself is in the hands of God,” whom he credits for the fact that he is being treated relatively well by the terrorists.

The reverend goes on to ask his colleagues and particularly to the president of the Ekklesiyar Yan'uwa a Nigeria (EYN – Church of the Brethren in Nigeria), Rev. Joel Billy, to speak to Adamawa state governor Ahmadu Umoru Fintri and other relevant officials in order to secure his release. While expressing confidence that he might return to his wife, children and colleagues “by the grace of God”, he adds that if this is not possible, then “maybe it is the will of God.” Pastor Andimi concludes by stating: “don’t cry, don’t worry, but thank God for everything.”

CSW’s Founder and Chief Executive Mervyn Thomas said: “We are deeply concerned by Pastor Andimi’s abduction and call for his unconditional release. We echo his plea for Governor Ahmadu Umoru Fintri and any other officials with influence to intervene to secure the release of this courageous man.”

Rev Andimi was abducted after terrorists, reportedly dressed in military fatigues, descended on Michika town on the evening of 3 January in a convoy of vehicles and ransacked the town for food and valuables. Prior to the release of the video, the pastor was last seen being forced into a Toyota Hilux.

The attack on Michika is part of an upsurge in violence by both factions of Boko Haram since December 2019.

On 22 December, during an attack on two passenger buses on Munguno road in Borno state, Muslim passengers were released while the Christians were held back and separated by gender. Three men, including a pastor from Deeper Life Bible Church, were killed on the spot, while the pastor’s relative Hannatu Sabastin Ishaya, and two humanitarian workers called Jennifer Ukambong and Asabe, were abducted.

On 23 December, the Islamic State West Africa Province (ISWAP) killed several people when they attacked the outskirts of the Yobe state capital Damaturu for the third time in two months, as well as Biu town in southern Borno state, using rocket-propelled grenades.

On 24 December, the Shekau faction attacked Kwarangulum village, situated 10 miles from Chibok, killing at least six people and injuring three. On the same day, two people were killed and around 12 injured on the outskirts of Biu during the second ISWAP attack in less than 24 hours.

The beheadings of 10 Christians and shooting of one Muslim caught international attention after a film of the executions was released by ISWAP to coincide with Christmas. Shekau himself released a video on the same day reiterating threats to Christian and to Muslims espousing liberal views, and disputing the divinity of Christ.

On 26 December, bride-to-be Martha Boulos was killed in an ambush by the Shekau faction, along with six members of her bridal party, as they travelled to Adamawa state for her wedding, which was due to take place on 31 December. Her sister Zainab was reportedly among the victims.

Mr Thomas added: “The sheer scale and pace of attacks by terrorist groups over the Christmas period should cause alarm worldwide. We urge the government of Nigeria, assisted by its allies, to formulate a comprehensive solution to the alarming rise in violence and abduction that is afflicting the lives of Nigerian civilians. In addition, given the general rise in jihadi activities in the West African region, we also urge the United Kingdom, France and other members of the international community to assist the Economic Community of West African States in formulating a coordinated regional response that will prevent this threat from metastasizing further.”