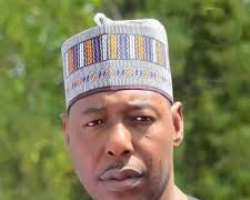 Borno Governor, Professor Babagana Umara Zulum has paid tribute to headquarters of the Nigerian Army for the swiftness with which the army announced readiness to immediately investigate conducts involving stop and search of passengers around Njimtilo.

Zulum spoke in reaction to a statement issued last night by Colonel Aminu Iliyasu, coordinator of the Army’s operations’ media.

The Governor, in a statement released by his spokesman, Isa Gusau, said the speedy response from the army headquarters only reaffirms what every Nigerian already knows about the exceptional leadership credentials of the Chief of Army Staff, Lt. Gen. Tukur Buratai, and many others that have done so much for Borno and Nigeria.

“Governor Zulum is very pleased with the swift action from the Army Headquarters and by implication, Headquarters of Operation Lafiya Dole.

" The decision to immediately investigate some conducts around Njimtilo in the course of (the absolute necessity to search vehicles for security purpose) only reaffirms what all Nigerians already do of the exceptional leadership style of the Chief of Army Staff, leadership of the theatre commander of Operation Lafiya Dole and many officers and men that have given so much in trying to find peace in Borno.

“Governor Zulum’s encounter with security officials around Njimtilo yesterday happened spontaneously. He was on his way to Jakana to meet citizens over a recent attack by insurgents. Going to Jakana required the Governor’s convoy passing through Njimtilo.

"As someone who took oath to serve the people of Borno State under every situation, he could not drive pass the gridlock he saw around Njimtilo, hence he needed to step in”

Nevertheless, yesterday’s encounter does not and will not change the very high regard the Governor has for all the security personnel operating in Borno, particularly soldiers who give up their lives and safety in finding peace for Borno."

The statement added that ",Zulum acknowledges and respects the sacrifices of these soldiers and the fact that they put their lives on the line operating in high ways, where insurgents try to ambush them.

"The Governor recognizes all of these and the fact that the military needs and deserves his support and the support of all citizens. However, he also knows that civil-military cooperation will be better enhanced when certain conducts of few are addressed in other to preserve and protect the integrity of majority of security personnel who not only do the right things, but make the ultimate sacrifices of giving up their lives for Borno citizens while others abandon their families for months and years fighting at the front lines”, the statement said.