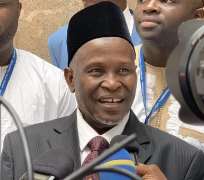 The Prominent Civil Rights Advocacy group- HUMAN RIGHTS WRITERS ASSOCIATION OF NIGERIA (HURIWA) has faulted the Chief justice of Nigeria Muhammad Tanko for the haste with which he dabbled into the swirling allegations made by the Kaduna businessman Alhaji Sani Dauda of ASD Motors against the immediate past Senator who represented Kaduna Central Senatorial District in the 8th Session of the National Assembly Senator SHEHU SANI just as the Rights group said the unnecessary interjection through the media space by the jurist in a matter that at best is still at the level of unproven allegations made by only one man does not dignify the high office that he (Tanko Muhammad) currently holds.

HURIWA said in a statement by the National Coordinator Comrade Emmanuel Onwubiko and the National Media Affairs Director Miss Zainab Yusuf that the media statement alleging and describing Senator SHEHU SANI as a 'liar' as reportedly attributed to the Chief justice of Nigeria Muhammadu Tanko, amounted to an attempt from the backyard to confer credibility to these sets of contested accusations against the Kaduna born Senator SHEHU SANI as made by the businessman Alhaji Sani Dauda whose allegations have been strenuously and vigourously denied and are been contested by the accused(SHEHU SANI) and who in indeed in the eyes of the law is ABSOLUTELY INNOCENT until a contrary determination is reached by the Competent Court of law (36(5) of the Nigerian Constitution (of 1999 as amended) and not the media court of Public opinion which is the arena that the Nigeria's current Chief justice has now decided to join the bandwagon of lynch mob justice choristers.

HURIWA said the Chief justice of Nigeria was totally wrong to have jumped into the media arena at this point in time when the matter was only at an elementary stage of investigations just as the Rights group regretted that his (Tanko Muhammad) position as the head of the nation's judiciary would have afforded him the discretion to have known that his statement against a citizen of Nigeria being accused of an unproven allegations is harmful and illegal because he (the accused) should be granted fair hearing in accordance with section 36(1) of the Nigerian Constitution.

"The media statements authorised by the Chief justice of Nigeria against Senator SHEHU SANI was done in bad faith and may adversely affect the exercise of his constitutionally guaranteed freedoms enshrined in the Constitution with specific reference to FAIRNESS of the judicial process that may be activated if the Economic and Financial Crimes Commission (EFCC) finds merits in the allegations made against Senator SHEHU SANI. The CJN should have waited until his own side of the story is requested privately by the investigators which he could still do without media grandstanding", HURIWA affirms.

HURIWA recalled that the Nigeria’s chief justice, Justice Tanko Muhammad, had denied knowing a former senator being investigated for alleged extortion disclosed in media claims credited to the spokesman for the Economic and Financial Crimes Commission who said Senator Shehu Sani was arrested for collecting $10,000 from a businessman, Sani Dauda, owner of ASD Motors who has a case pending with the anti-graft agency.

Dauda claimed Sani told him he needed the money to bribe Tanko and four other judges to influence the case in favour of Dauda.

HURIWA recalled that the the Chief Justice of Nigeria Muhammad Tanko had through his media chief Festus Akande made the following statements to the media:

“Senator Shehu Sani is not known to the CJN,” “Justice Tanko Muhammad has never, in his entire life, seen or had any form of encounter or interaction, either directly or remotely with Shehu Sani, let alone giving him assurances of what is not only unethical but equally despicable and inglorious, to say the least.”

“Let it be known that if the statement credited to Shehu Sani was actually made by him, it is simply a blatant lie, a figment of his imagination and an orchestrated falsehood immodestly concocted to malign, smear and disingenuously tarnish the good image and reputation of the CJN with a view to gaining financial reward."

HURIWA however stated that the statement by the Chief justice of Nigeria Tanko Muhammad was HASTY and ill-timed and could be misconstrued as another angle of the larger conspiracy to rope in the vocal critic of the current President Muhammadu Buhari into the alleged charges just so he can be death with by the system through the instrumentality of the prosecution to be waged by the Economic and Financial Crimes Commission (EFCC). "These weighty statements by the CJN has added salt to injury against one of the parties in the legal cum possible criminal trial. This is now a conundrum. Honestly, silence is golden by the Chief Justice of Nigeria because the way it is now with some media houses giving these statements different interpretative meaning most of which have graphically concluded that the accused person who has denied all the allegations is guilty even before he has had any opportunity to explain his own side of the story to a competent court of law. Those who hold the sacred task of being custodians and ministers in the temple of justice should not be seen doing things or saying things that casts aspersions on the integrity and independence of the judiciary."