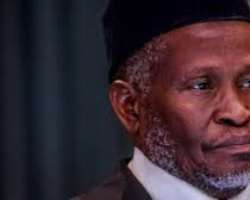 The Chief Justice of Nigeria (CJN), Justice Tanko Muhammad, has denied links with a former senator representing Kaduna Central, Shehu Sani, who is being investigated by the Economic and Financial Crimes Commission (EFCC) for alleged extortion.

The complainant, Alhaji Sani Dauda, who reported Sani to the EFCC had claimed that the former senator demanded N4m from him to give to the CJN and four other judges to influence some pending cases in court.

But the CJN, through a statement by the Supreme Court’s Director, Press and Information, Dr Festus Akande, described the claim as a blatant lie.

The statement read in part, “Justice Tanko Muhammad has never, in his entire life, seen or had any form of encounter or interaction, either directly or remotely with Shehu Sani, let alone giving him assurances of what is not only unethical but equally despicable and inglorious, to say the least.”

“Let it be known that if the statement credited to Shehu Sani was actually made by him, it is simply a blatant lie, a figment of his imagination and an orchestrated falsehood immodestly concocted to malign, smear and disingenuously tarnish the good image and reputation of the CJN with a view to gaining financial reward.”