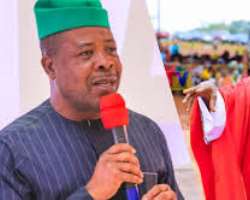 Enugu Catholic priest and spiritual director of Adoration Ministry Enugu Nigeria (AMEN), Fr. Ejike Mbaka, has tackled Governor Emeka Ihedioha and his supporters for attacking him over his prophecy that “a new government with a new flag” was about to spring up in the state.

The priest, who reacted in his service at the adoration ministry, permanent site Umujigbo Nike, Enugu State, yesterday, told the governor to prepare to leave office.

Mbaka in his homily gave more clarification about the prophecy and told Ihedioha to prepare to leave office that the Holy Spirit had rejected him, and a new “hope, with a new flag” will take over the government of the state.

“Those who are attacking the message are just casting Pearl before swine, holy spirit has said it, and that is final.

“I don’t know how it will happen, but the only thing is that I see hope, joy, and a new government coming in Imo State.

“Even though Ihedioha has won in tribunal and Appeal Court, that doesn’t mean he will triumph in Supreme Court. Enough of all this brouhaha!

“What we’re doing in adoration here is spiritual, it is not according to our power, it is Holy Spirit. Once he reveal it, we say it.

“Ihedioha and his co should go and relax; this is not unprecedented, it happened to (Goodluck) Jonathan, Atiku (Abubakar) and Peter Obi. And after everything, my prophecy came through. You must not be the Governor of Imo State, and you are not better than Hope Uzodimma,” Mbaka said

Meanwhile, Governorship candidate of the All Progressive Congress (APC) in the last election in Imo state, senator Hope Uzodinma yesterday took a swipe on governor Emeka Ihedioha over his recent reaction to fairy catholic priest, Ejike Mbaka’s prophesy Which he claimed is a contempt of court.

Ihedioha had replied to Mbaka’s prophecy claiming that Uzodinma would emerge victorious in the awaited Supreme Court judgement.

The governor in his response had described Mbaka’s utterance as a contempt of court.

However, Uzodinma in a statement claimed Governor Ihedioha by his comment is guilty of “contempt of God.”

Uzodinma, who also accused the governor of disrespecting the judiciary frowned at his claim that the supreme court has nullified his candidacy as flag bearer of APC.

The APC gubernatorial candidate further said it was pitiable that Ihedioha, who is a well known believer and admirer of Father Mbaka could go as far as raining public assaults on him because his prophecy did not favour him.

Uzodinma claimed that Ihedioha has incurred the wrath of God following his outburst against Mbaka .