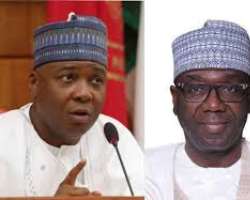 The Chairman, Committee on the Review of Kwara State Government Properties from 1999 to 2019, Senator Suleiman Ajadi, said on Sunday that the controversy over the reclamation of the land bordering the civil service clinic was needless.

He said the Kwara State Government had only recovered a property that originally belonged to it but was unlawfully diverted for private use.

Ajadi, who addressed journalists in Ilorin on Sunday, explained that the Asa Investment Company owned by the late Dr Olusola Saraki never applied to the state government for allocation of the land.

He also said that neither the firm nor the Saraki family, was issued with documents that gave it the right to occupy or erect structures on the property, located on plot 1,3 and 5, Civil Service Clinic, Ilofa Road, GRA, Ilorin.

Ajadi said, “Many of the publications on the land were either erroneous or mischievous as there are no proofs anywhere that the land ever belongs to Asa Investment Limited.

“The issue of the land in question came under the terms of reference of this committee which considered several other properties of government and submitted its recommendations in July 2019.

“As was the case with all the properties looked into by the committee, the committee’s recommendations were based on strictly available records from the archives of government.

“Based on the available records, the committee did not see proof of any payments nor an approved Right of Occupancy even though there was a letter of allocation in principle.

“In reaching its conclusions, the committee noted the foundation work with erected columns at some areas of the larger segment of the land.

“The committee also noted that the land in question was also a part of a larger parcel of land, part of which has been developed into the Civil Service Clinic and Secretariat complex, now housing the state Ministry of Finance, among others.

“Finally, based on the existing convention that land acquired by government in overriding public interest cannot be converted to private use, unless under extraneous circumstances which requires the express approval of the governor of the state, the committee did not see a case made for the land and neither was there any approval from the governor of the state to convert it to private use.”

Ajadi explained that he was the Commissioner for Finance and Economic Planning in the state between 1994 and 1996 when the building presently housing the Ministry of Finance was constructed.

He said, “There were massive foundation with structured pillars and iron rod on the land before it was taken over by the ASA Investment Limited.

“When it was taken over, the foundation was removed, but there is a foundation on the portion of the land that was not touched and it is still there now.”

Ajadi, who addressed the journalists in company with members of his committee, described as false, the claims that the government demolished a structure belonging to the late Senator Olusola Saraki.