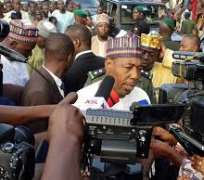 This happened less than two days after he commissioned seven projects comprising of five in Hawul local government area which share borders with Biu and two in Gwoza.

Zulum's first activity in Biu was the commissioning of a Mega Primary School in Biu town which has 3 blocks of 8 classrooms with staff administrative block. The Governor also commissioned a freshly built local government secretariat complex made of 40 offices and local education authority complex which has 14 offices. The Mega school was built by the administration of Kashim Shettima and equipped by Zulum while the other two projects were started by Zulum in June 2019.

The Governor directed that the road be completed within the next 70 days and assured that his administration would embark on additional 4.5km of roads in Biu town.

Zulum also laid the foundation for the construction of a modern Biu central mosque around the emir’s palace, with capacity for 3,000 worshippers.

The Governor, his entourage, government officials and other stakeholders paid homage to the Emir of Biu.